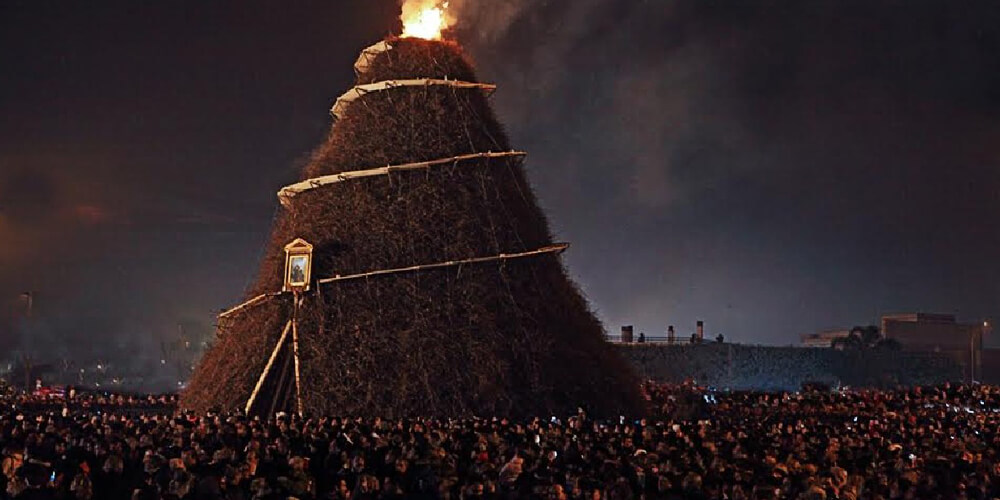 In January, Novoli celebrates “the days of fire” with the huge awe-inspiring bonfire of the Fòcara, as part of a festival dedicated to Sant'Antoni de su Fogu (St. Antonio Abate, Saint Anthony the Abbot).

The highlight of the festival, which takes place from the 16th to the 18th January, is the lighting of the Fòcara on January 16th, a huge bonfire some 20m wide and over 25m high.

Between 80,000 - 100,000 bundles of cuttings from the vines are used, which are collected after the September harvest. From 7th January the organisers with the help of volunteers start to construct the massive bonfire.

The devotion to Saint Antonio dates back to 1664 when the Bishop of Novoli elected him as their patron saint.

Legend has it that in the chill of winter, before man had fire and the means to stay warm, Antonio was asked to descend into to the underworld to ask for it; then he could return with a flame and light up the very first fire.

He made the journey with his little pig, battled demons and stole the spark that gave humanity fire.

The festival is one of Puglia’s most crowd-pulling winter events, imbued with folklore and popular religiosity, and steeped in a marvelous atmosphere of music, art, entertainment and (of course) gastronomy.

The religious rites, together with the Fòcara itself and the spectacular fireworks, draw tens of thousands of pilgrims and visitors each year.