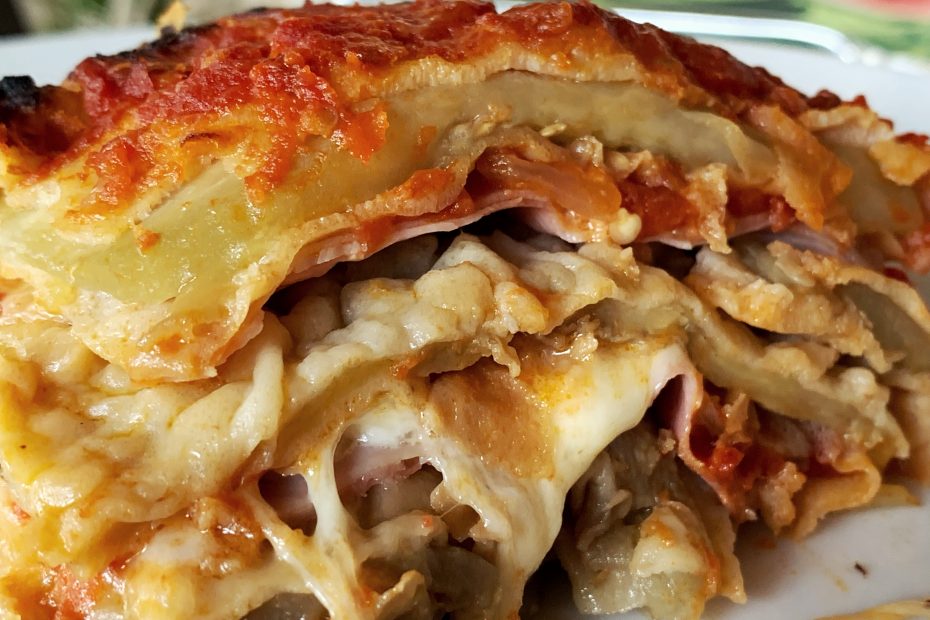 Italy is the country with thousands of bell towers and thousands of recipes. A culinary heritage unimaginably rich for those demanding diversity and distinctive “local” dishes.

Every region claims to have the best food. As the late food writer and chef Antonio Carluccio once said, it is the campanilismo. Everyone knows the sound of the bell of their own village just as every Italian recognises a dish as their own.

Parmigiana may be one of Italy’s most celebrated dishes, rooted in the south. Regional and provincial variations ensure the fine tuning and widespread a-peal of the recipe, at its core a celebration of aubergine (eggplant), tomato and mozzarella. 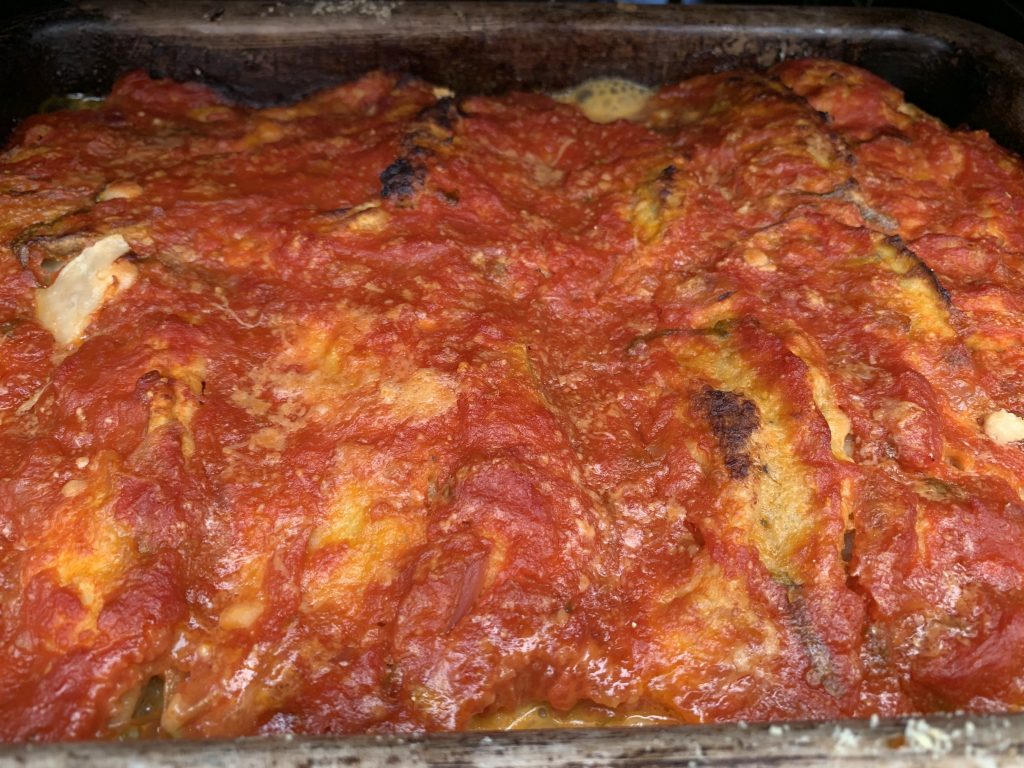 A brief history of the aubergine in Italy

Imported by the Arabs to Spain and Sicily, aubergine was viewed with suspicion for a very long time. The name in Italian, melanzana, comes from mela insana - the “unsound apple”. Writing in the 16th century Bartolomeo Scappi references the pomo sdegnoso (lowly apple) while in 1557 Andrea Mattioli describes it as a “vulgar plant” customarily eaten by the common people:

“Fried in oil with salt and pepper, it is eaten by the masses, in the way that mushrooms are eaten.”
~ Mariotti, I discorsi, chap. 78

It wasn’t until the middle of the nineteenth century that writers like Pellegrino Artusi reappraise the aubergine’s merits in the kitchen. 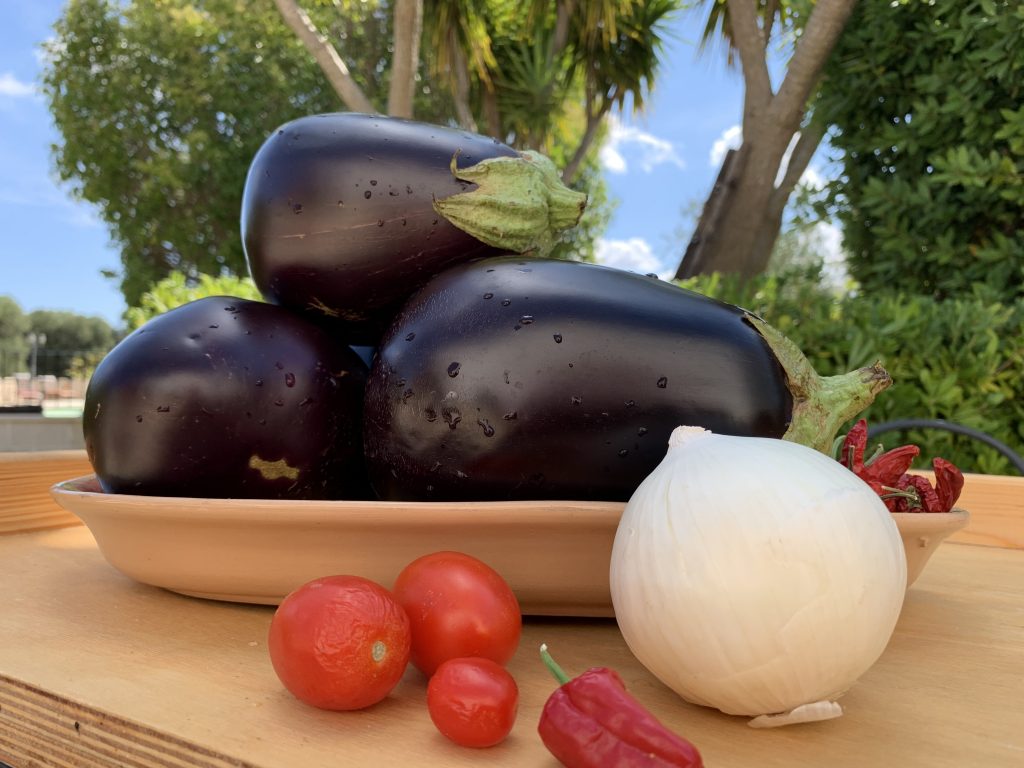 We often buy parmigiana from our baker to take to the beach with us. But in #thePugliaKitchen this is a dish we prefer to make as summer turns and we start thinking of the next one. As we often joke, in Puglia ci sono solo due stagioni. Estate e non estate. In Puglia we only have two seasons. Summer and not summer.

Our recipe has a provincial twist. We batter then fry our aubergine, and add a layer of wafer thin sliced prosciutto (cooked ham rather than cured), as we do with our lasagne.

These are both optional. The recipe works as well without, though frying the eggplant adds a sumptuous dimension of deliciousness, especially if you let the baked parmigiana rest for a day before tucking in!

For the tomato sauce 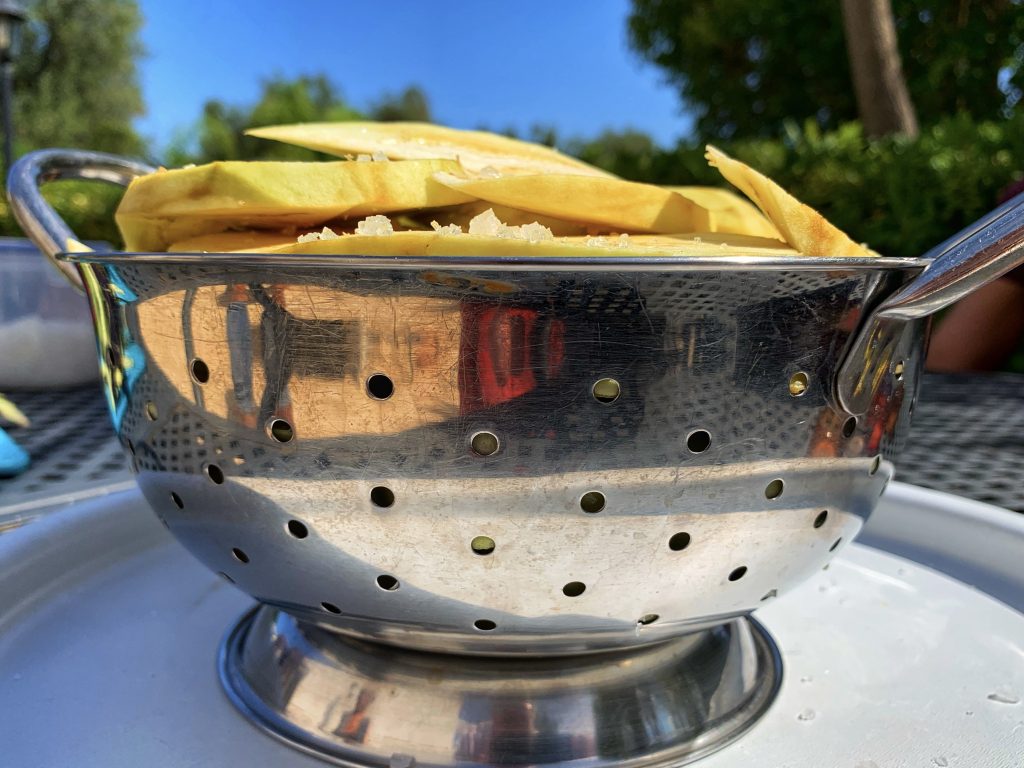 Slice and salt the aubergine.

Layer in a colander and sit a weight atop to press down. We use our solid stone mortar and pestle balanced on top of a side plate. Set aside to drain for 30 minutes. 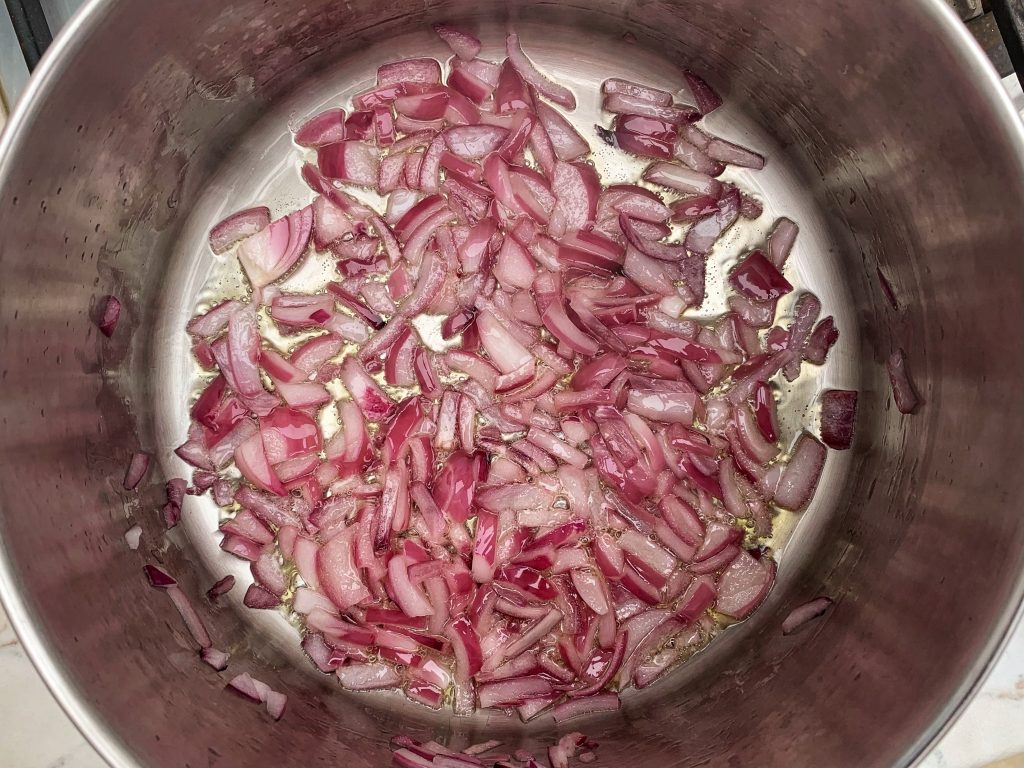 Heat the olive oil in a medium pan. Add the finely chopped onion and fry gently until translucent. We used a red onion for sweetness, but any onion is fine. 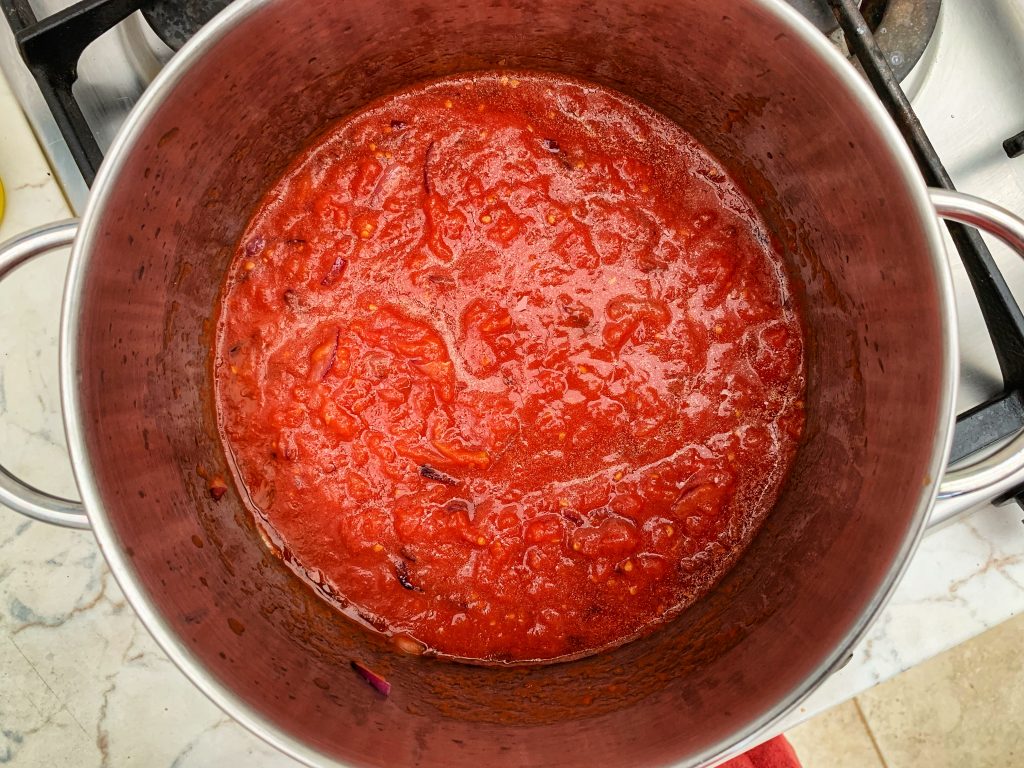 If you are using whole tomatoes cut them up by drawing a small sharp knife through them a few times while in the tin. Add to the pan and bring to a simmer.

Season with salt and simmer for 30 minutes over a flame that gently tickles the sauce instead of making it bubble in anger.

Once cooked we tear our basil leaves and drop them into the sauce, stir it once and set aside. If your tomato sauce hasn’t broken down you can pass it through a sieve or blend it, then add the torn basil.

Our tomatoes are packed with flavour, but if you need or prefer a little more seasoning you can use some black pepper and add a pinch of dried oregano.

Depending on our mood we might add a couple of anchovy fillets and melt them in the oil before adding the onion.

In Puglia garlic is typically used to flavour the oil. We wouldn’t usually add it to our sugò. But if this is to your taste we would slice 2-3 cloves thinly, fry them in the oil and remove them with a slotted spoon before they brown and bitter, before adding the onion.

If you need a garlic hit add the crushed garlic once the onion is ready to receive the tomatoes, stir gently and then add the tomatoes. 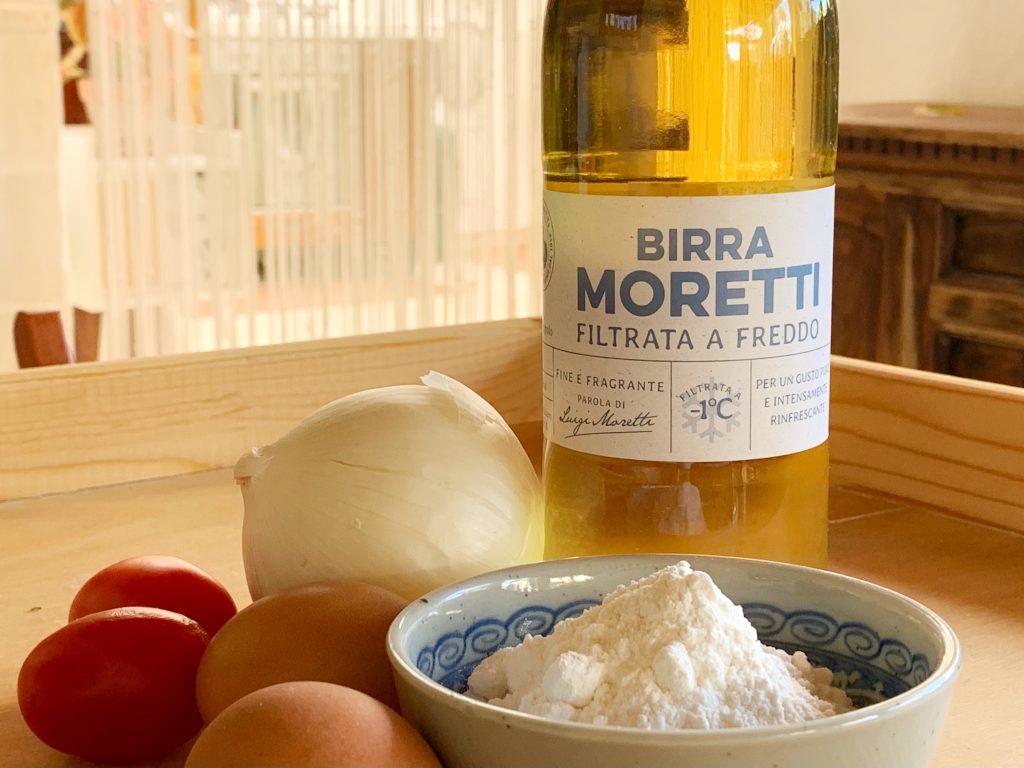 Frying in a batter adds a sumptuous other dimension to the parmigiana and soaks up the flavour of the sugò.

We make a light crisp batter with beer.  Beat 3 eggs in a bowl. Add about half the flour, a pinch of bicarbonate and whisk into the egg. Once incorporated add the rest of the flour and whisk again until you have a smooth paste. Add the pinch of salt and then the beer, a few pours at a time, until the consistency seems right.

Avoid a thick, claggy batter, although it does need to have the balls to stick to the aubergine!

Remove the aubergine from the colander. Squeeze the liquid out and lay the slices on a clean tea towel or kitchen paper.

Bring the oil to frying temperature, batter and fry the aubergine slices a few at a time.

If a batter seems too fussy then simply dust the slices of aubergine in flour and then coat in the beaten egg. Gently lower and carefully release into the oil. 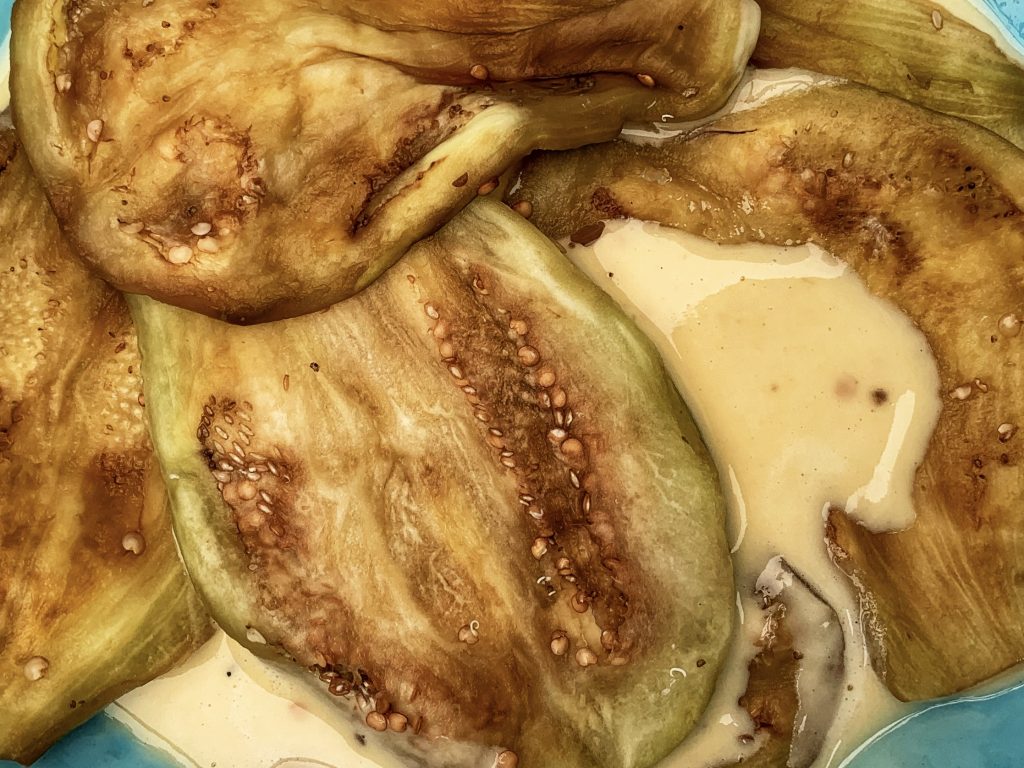 Fry in the olive oil until crisp and golden. Turn mid-way through after about 2 minutes. 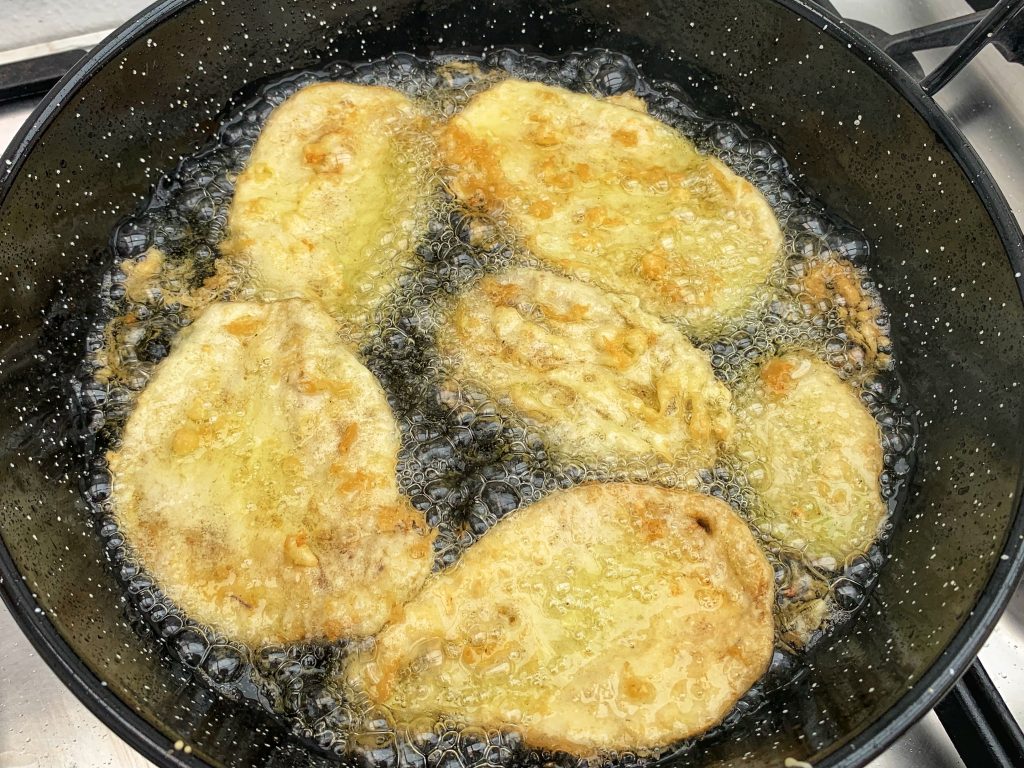 Remove from the oil and set aside on absorbent kitchen roll. Repeat until all the aubergine has been fried.

You may need to make more batter as you go along. Any left over can be used to fry onion rings or yesterday’s bread. 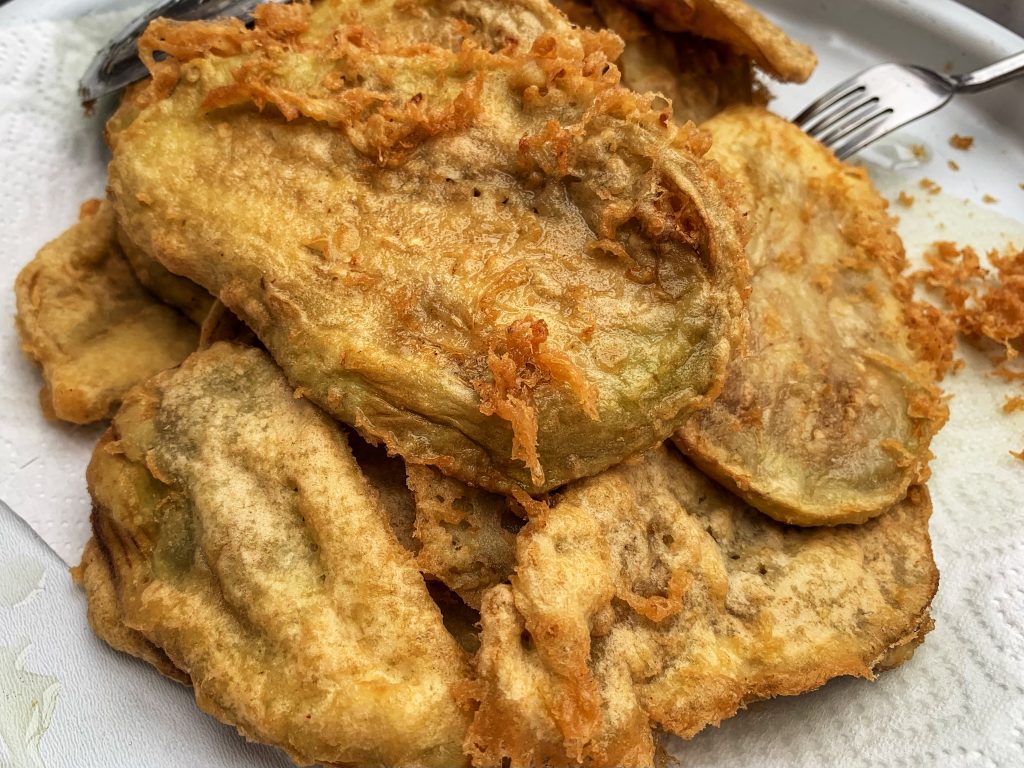 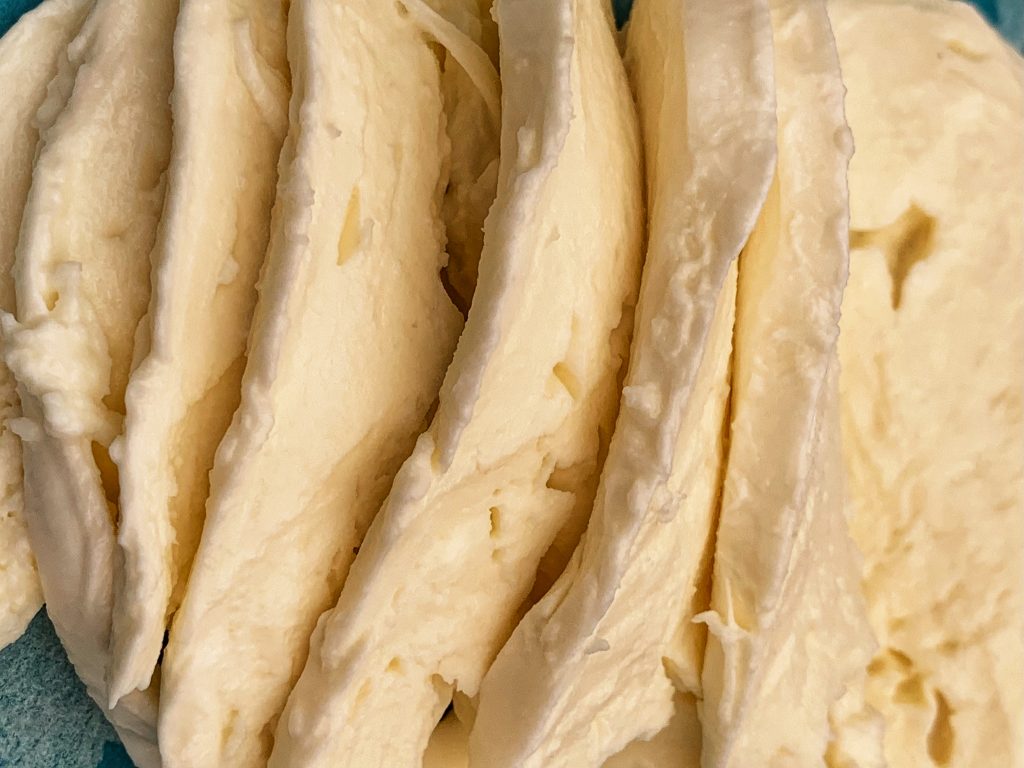 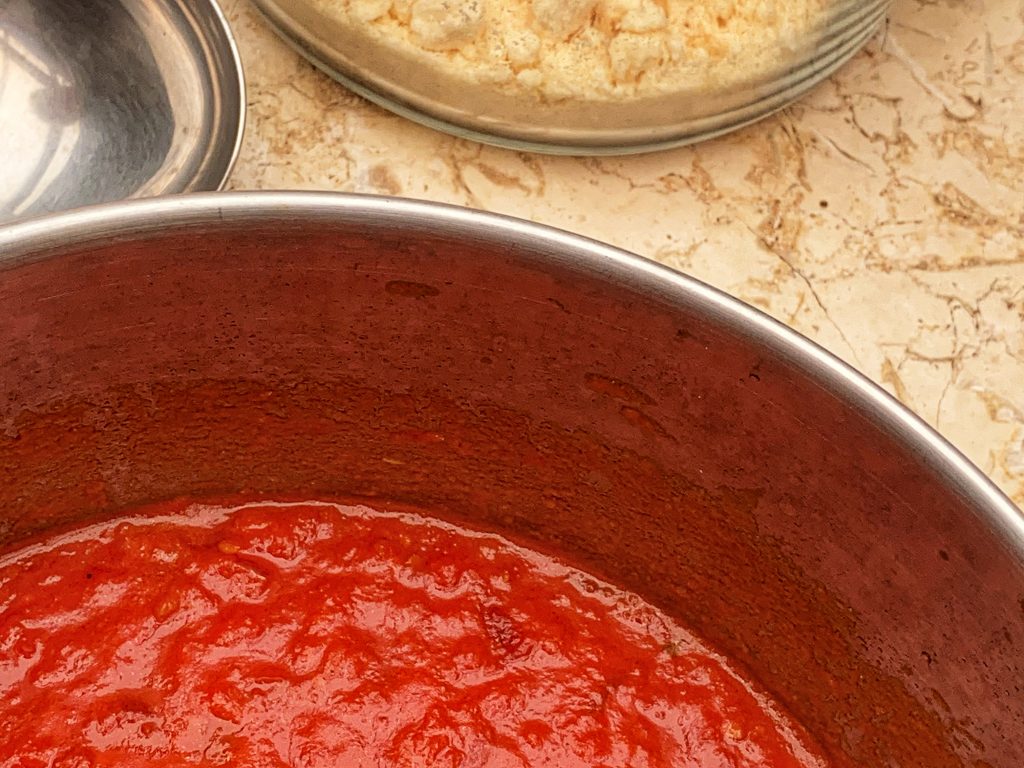 First lay out in front of you the sauce, Parmesan, prosciutto, fried aubergine and the mozzarella.

Start with some sauce. 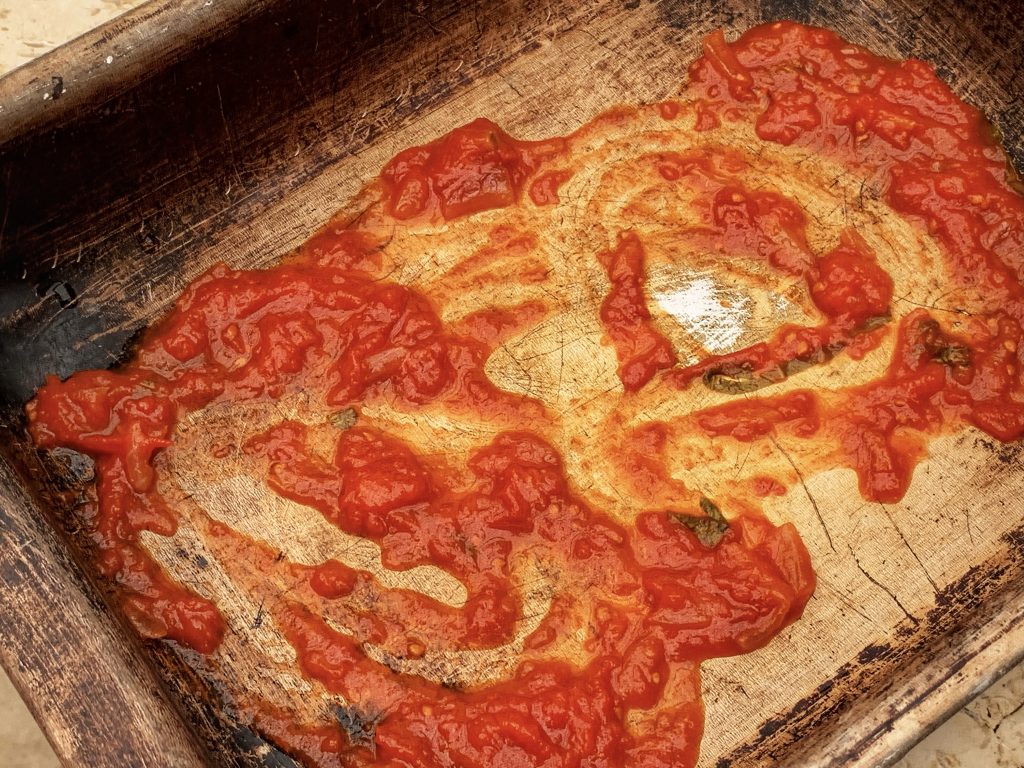 Add a layer of the fried aubergine. 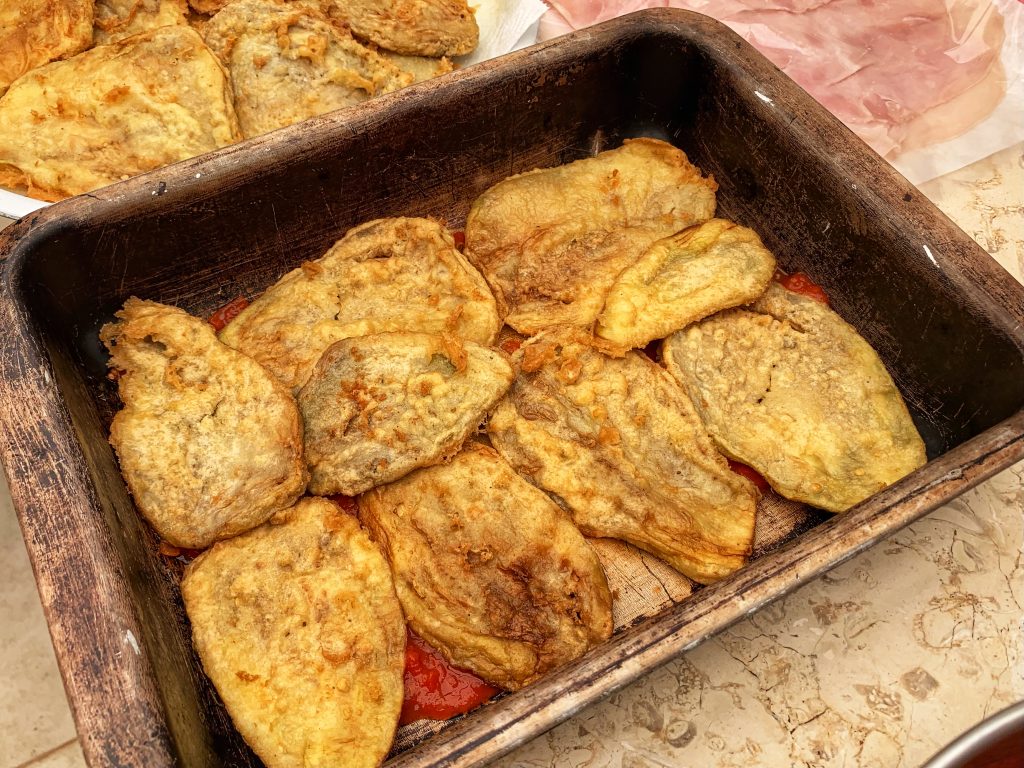 Then add a layer of the prosciutto. 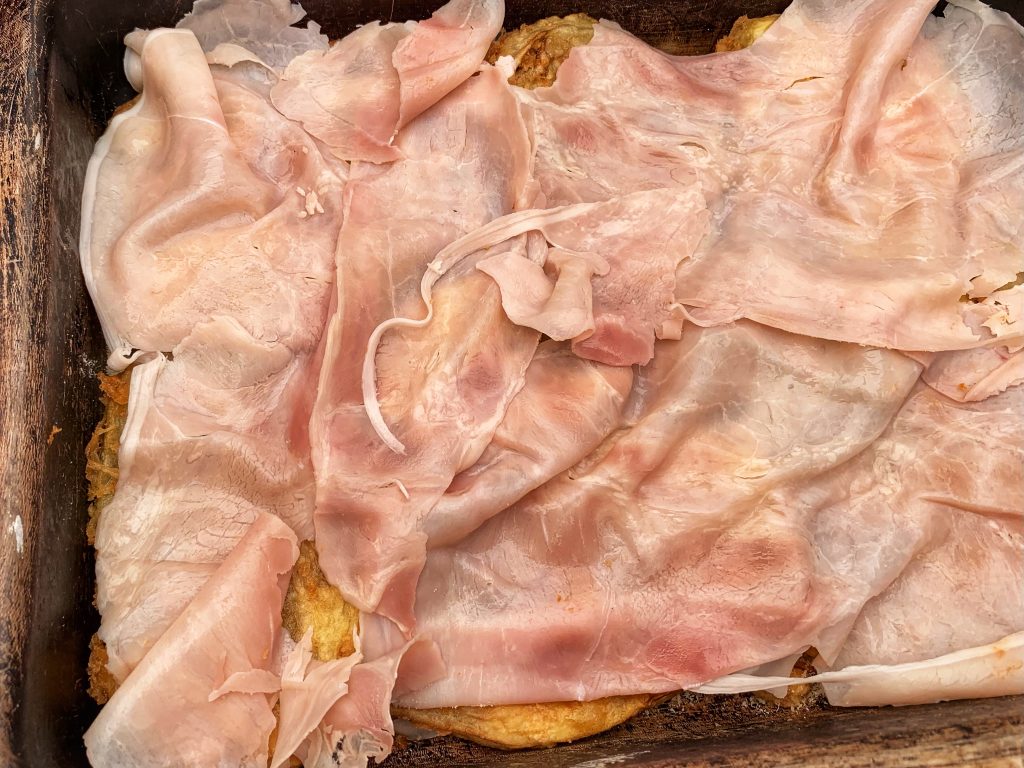 The sliced mozzarella sits atop the ham. 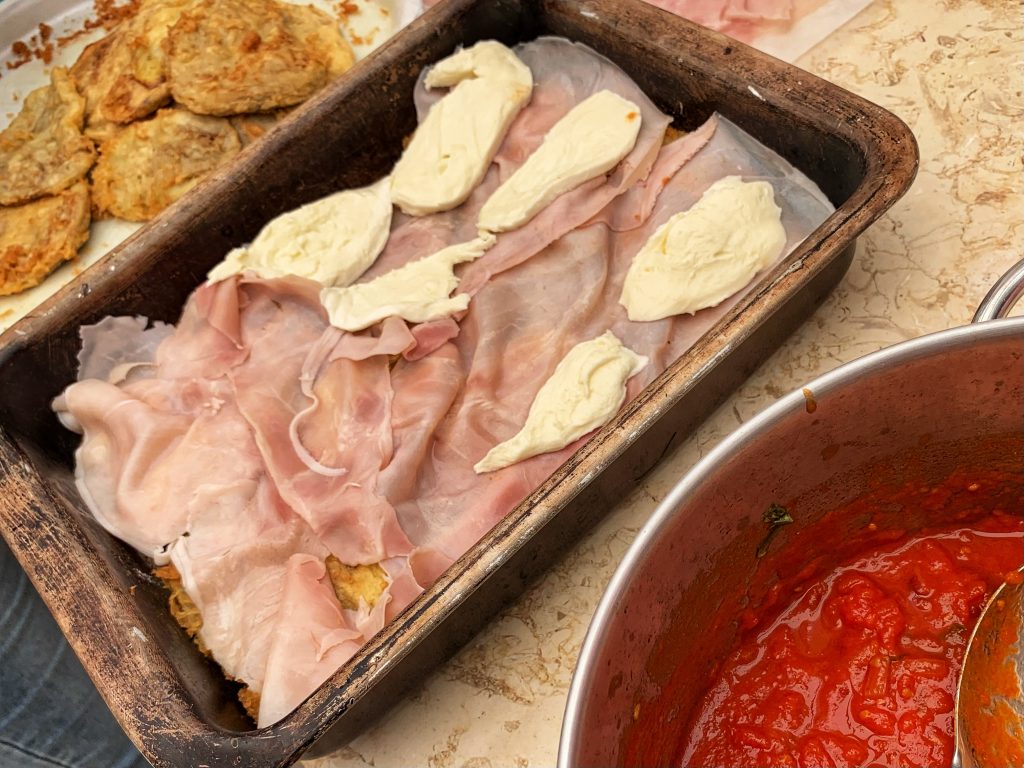 Finish with a generous sprinkle of Parmesan. 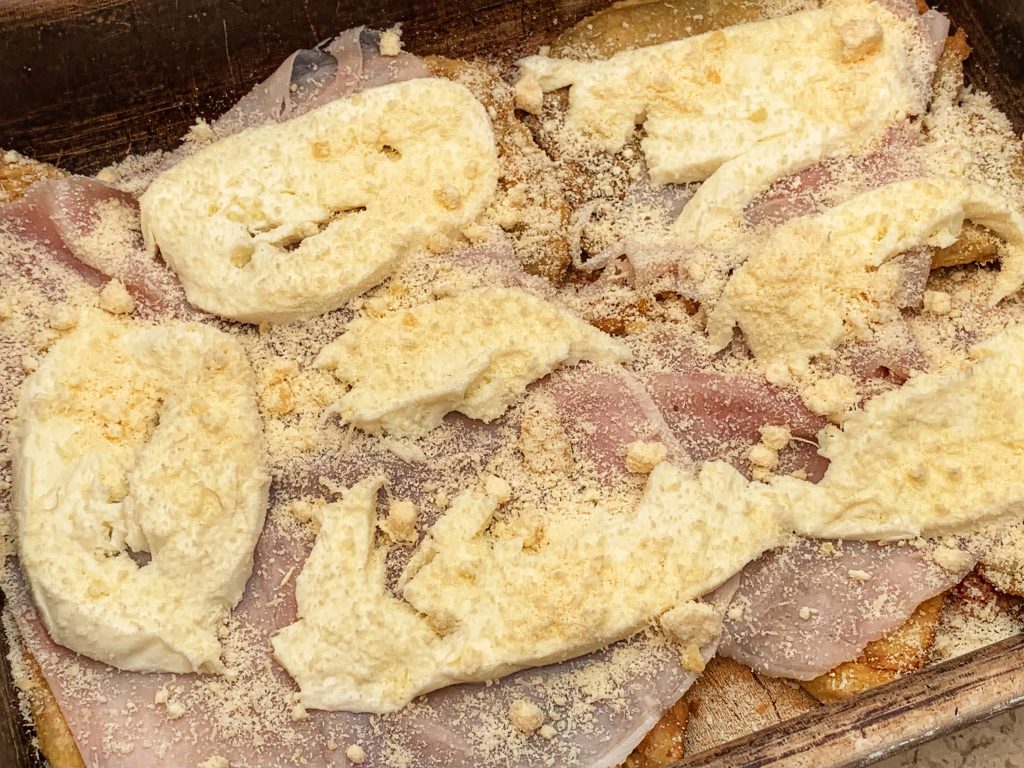 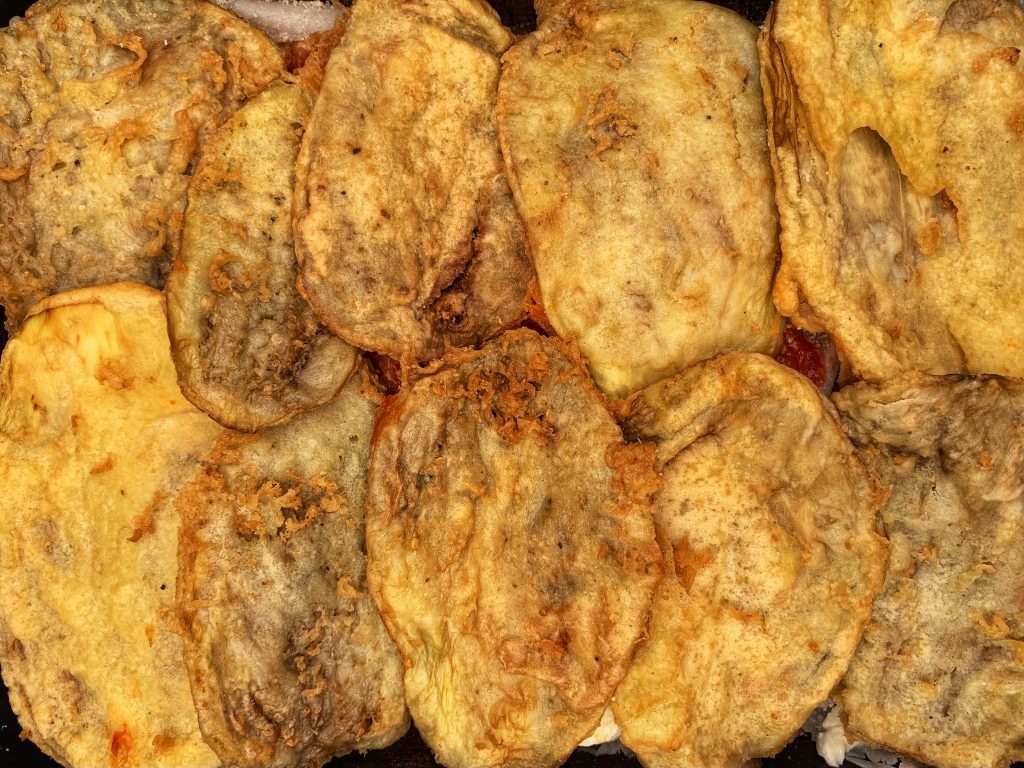 We usually add another full strata, before finishing off with a third layer of aubergine which we cover with the last of our tomato sauce. 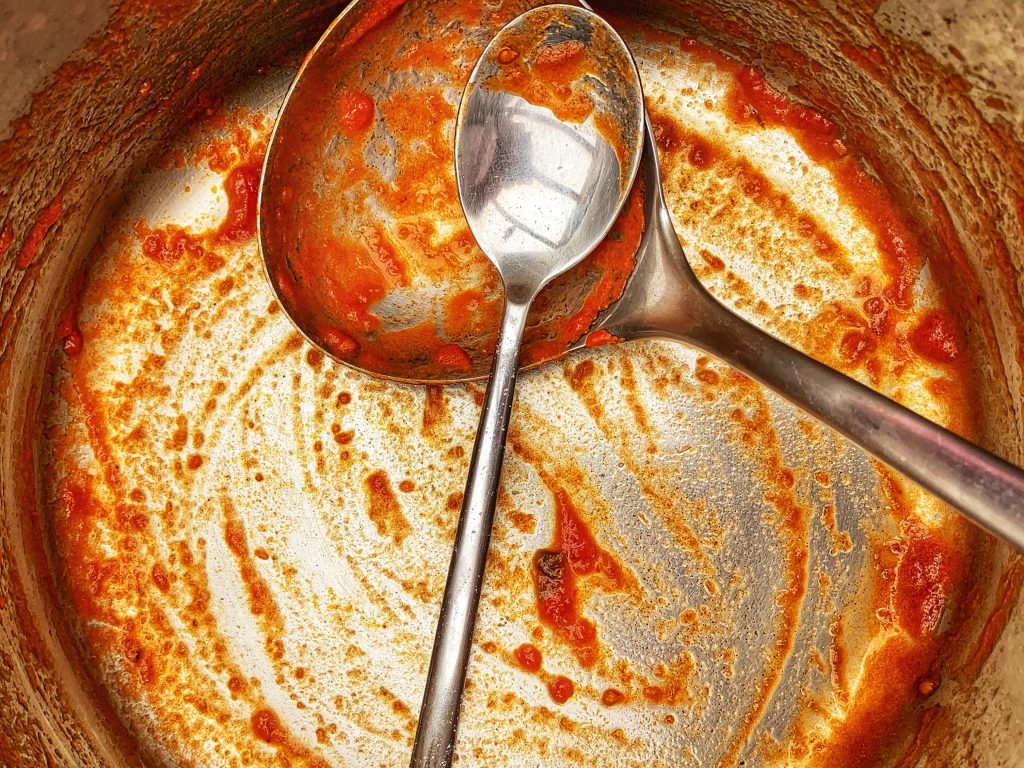 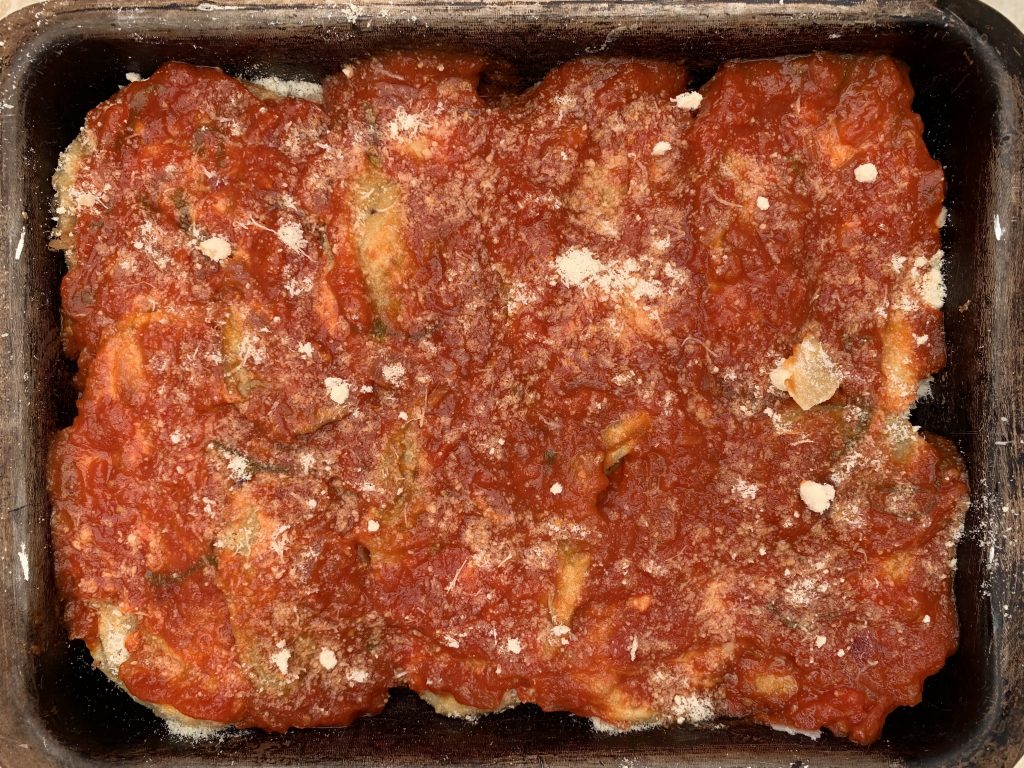 The parmigiana goes into a hot oven. 250C, uncovered.

Keep an eye on it and enjoy the smell! Ours cooks for 40 minutes. 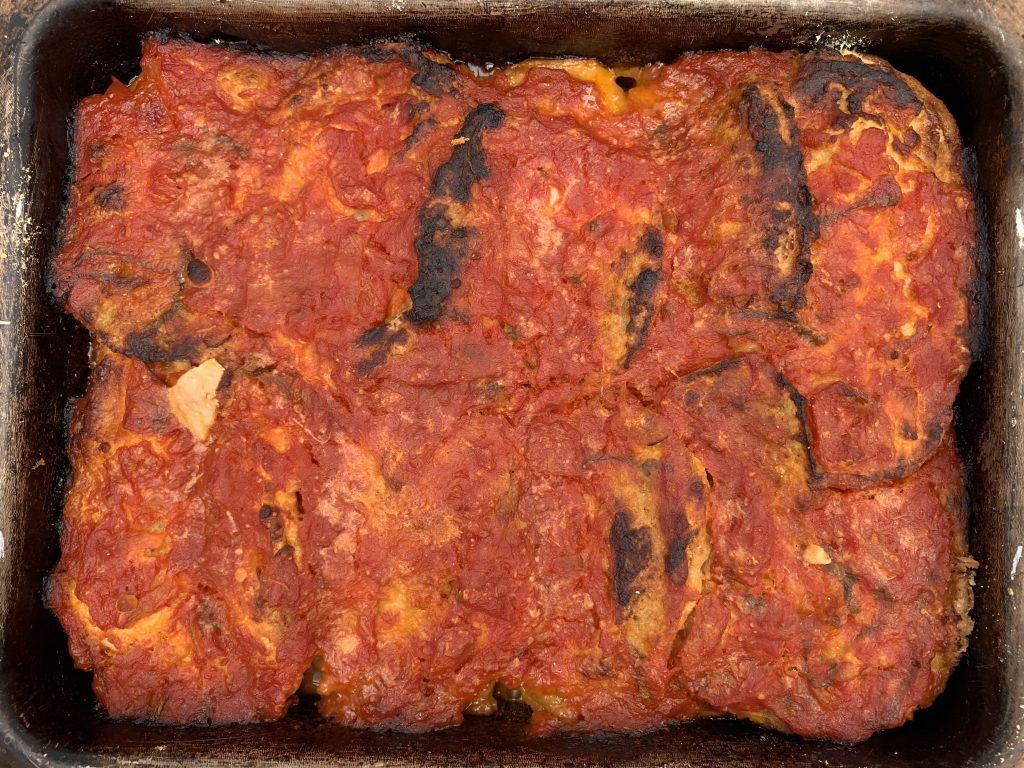 The parmigiana is ready. This gave us 8 portions.

However, as with our pasta al forno, we prefer to cook this one day and eat it the next. The flavours become so much more intense.

Once cooled we cover our parmigiana with foil and put it in the fridge.

The next day we take it out about an hour before cooking. It goes into a preheated oven at 175C with the foil on, for 35 minutes. The dish is already cooked, so this is to make sure its heated up thoroughly throughout.

Then we crank the oven up to 200C, remove the foil, drizzle with our olive oil and reheat for another 5-10 minutes to crisp up the top.

Finally we can eat it.