Puglia’s Exciting Gay Beaches Are Waiting For You 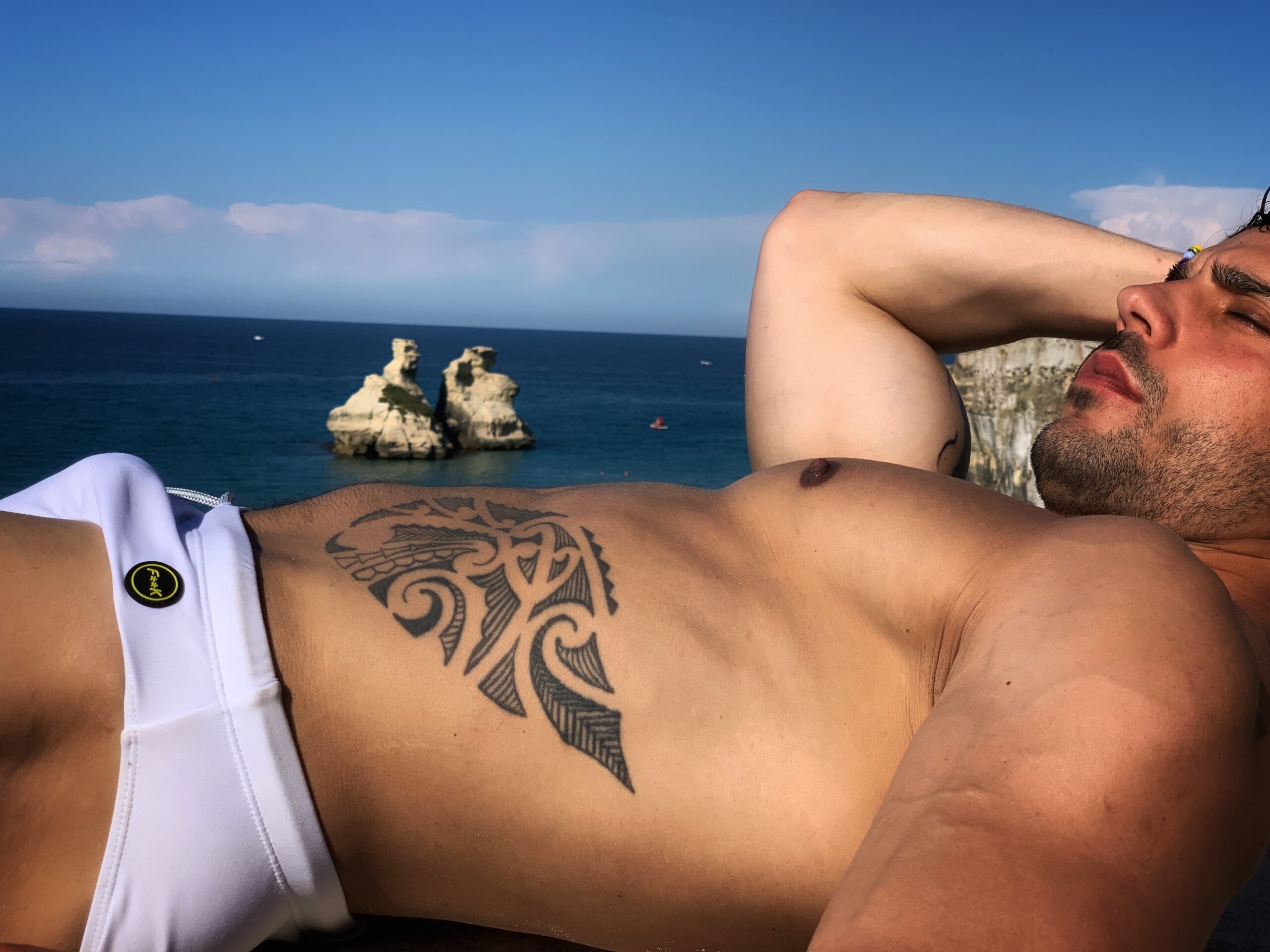 With over 800km of coast, Puglia has some of the best beaches in Italy. Stretches of soft white and golden sand alternate with rocky shelves and hidden coves, surrounded by crystal clear waters.

Puglia stands out as home of Italy’s top LGBTQ+ seaside destinations. According to the Italian National Tourist Board:

“Puglia, the ‘Heel of Italy’ is rightly considered one of the most gay-friendly Italian regions. The natural beauty of the beaches of Salento and the city of Gallipoli, surrounded by the sea, creates the perfect atmosphere for a vibrant LGBTQ+ community”.

Take me to your gay beach

Puglia’s top three gay and nudist beaches are visited by most international visitors. Alongside them are lesser known gay and nudist spots up and down the length of Puglia’s Adriatic and Ionian coasts. From Vico del Gargano and Manfredonia in Gargano to Monopoli, Lecce, Nardò and Taranto.

Additionally there are popular local cruising beaches not generally known outside Puglia.

D’Ayala beach is easy to access. It’s a 5-minute walk from parking your car to hitting the gay section (the most extensive part of D’Ayala’s naturist beach).

A popular beach frequented by committed naturists and dripping with good looking men searching for sun, sea and something else. A must visit if you want to experience Puglia’s finest.

Our favorite of Puglia’s gay beaches and in 2021 voted one of Italy’s top 5.

Torre Guaceto is a huge nature reserve lying to the north of Brindisi, not far from Ostuni. It is home to one of Puglia’s most popular gay and naturist beaches, frequented by locals and visitors.

But its secluded location means that it takes a little time to get there – and most gay guides take you the long way round. Locals have a quicker and easier way to get there.

There are no facilities on the beach, and swimming is prohibited. Nevertheless this is ignored!

One of Puglia’s most beautiful and most popular beaches. Punta della Suina is part of a larger coastal nature reserve located in the lower half of the Bay of Gallipoli, a crescent shaped bay extending from Gallipoli to Punta Pizzo.

In 2022 it was one of only five Italian beaches to be included in the list of 40 of the best beaches in Europe.

AVOID Lido G-Beach Club at Punta della Suina. Some gay travel guides refer to it as a gay friendly beach club. Whilst the public beach either side is popular with gays, following a change of management, Lido G-Beach Club was widely reported as homophobic when they asked two same sex couples, in separate incidents, to leave for kissing. In their response reported in local media they referred to homosexuality as a “choice”. Completely unrelated to these incidents, their PR agent had previously asked us to remove a first a tag and then a photo of the club from our Instagram explaining this was because they are not a gay destination.

Gallipoli has a well known reputation for being one of Italy’s top gay destinations, drawing a cosmopolitan and sophisticated international gay crowd.

If you want a cool beach vibe, a gay friendly crowd and some fine sandy beach around Gallipoli head here. It draws a mixed crowd in every respect. Italians and international visitors, younger and older, friends and couples, gay and straight.

Be sure to stay to watch the sunset behind the old town. It’s spectacular.

Rugged limestone cliffs, hidden caves and private coves, sea stacks majestically reaching into an infinity of blue and the trabuchi; wooden fishing platforms, a cross between grotesque spiders and steampunk oil rigs. The Gargano National Park extends across much of Gargano’s interior, within which sits the dark and prehistoric Foresta Umbra.

Most of the Gargano – which forms the spur of Italy’s boot – is a national park. Verdant and mountainous it remains unspoilt. The drive through the ancient oak and beech forest will offer glimpses of a dramatic coastline of coves and caves cut into the white limestone cliffs and long stretches of white, sandy or pebble beaches.

The coastline remains largely undeveloped and wild, apart from a few seaside resorts and fishing towns along the 170km mainland coast.

The bay is made up of three small coves, called “alle murgiette”. Dense pine forest runs behind.

Access is by foot, either from the main SS89 Garganica highway or by walking along the beach from Baia Calenella on the east or from San Menaio beach on the west.

The murgiette draw a gay crowd all summer long. The first bay lies between two rocky ridges extending out into the sea, making the beach quiet and secluded and popular with naturists.

There are no facilities, and unlike the other nearby beaches, this is a pebble beach, so bring ciabatte.

The beach at Lido di Siponto lying south of Manfredonia, at the beginning of the Gargano promontory, has kilometers of sandy beach.

A popular local gay-friendly nudist beach is located by Spiaggia Libera litorale Sud Siponto (located in the section between the Lido Aeronautica military beach and the Candelaro stream). Head towards the dunes.

More | The Puglia Guys road trip from Bari to Peschici

This beach is located between Trani and Barletta, located in the Boccadoro nature reserve. Some sand and pebbles, though not the finest of beaches.

From the SS16 take the Trani Zona Industriale Boccadoro exit. Continue directly to the sea. Busiest times | mornings | afternoons | to and from work | summer season.

The local naturist beach is located by the tower, with a gay area just beyond. Access from the tower. Torre Calderina is a narrow, pebble beach. One for the die hards.

Torre Gavetone lies south of Molfetta. South of the tower almost mid-way between the tower and the lido beach club Le Mar Village are two bays frequented by naturists.

A beach of rocky coves, with an abandoned building behind it.

Polignano a Mare and Monopoli are often suggested for those looking for a base in the Valle d’Itria, but here sand is at a premium, with typically pebble beaches and rocky shelves. The Valle d’Itria’s best sandy beaches start around Capitolo, south of Monopoli continuing, in stops and starts, south to Torre Canne, Specchiolla and Torre Guaceto.

Situated along the beautiful Costa Ripagnola between Cozze and Polignano a Mare. This section of coast is peppered with trulli, wonderful coves and has beautiful blue sea.

The naturist, ‘alternative’ beach (2km of rocky shelves and coves) is between Pietra Egea and Cala Capoti, a little beyond Cala Capoti in the direction of Cozze.

How to get there | Exit the SS16 and continue along the complanare | heading south towards Polignano at the Cozze exit | heading north towards Cozze at the Polignano a Mare Nord exit | continue to Cala Fetente where you take the road towards the sea, park and continue by foot.

Cala Incina is the main beach, a narrow, rocky cove, dominated by the 16th century watchtower.

Torre Incina is popular with naturists, though they typically keep away from the main cove.

The gay / naturist area is on the Polignano side of the tower (i.e. on the left as you face the sea), a short walk along the wild rocky coast.

Torre Pozzelle takes its name from the Aragonese watchtower at the side of the bay.

Around 8km from Ostuni, there is a small sandy beach with rocky shelves running along either side and an extensive pine forrest behind.

Popular with families, due to the large touristic village behind the beach, it is also a well known local gay cruising area often frequented by men who identify as straight but enjoy occasional sex with other men from time to time.

Lamaforca beach, the last of Ostuni’s marinas, has a discreet gay section and a reputation as a popular gay cruising haunt (the action takes place in the trails running through the pine forest behind the cove).

It is a popular family beach for visitors staying in the touristic village adjacent to the beach.

Take the Torre Pozzella exit off the main coastal highway (E55) and turn right for Lamaforca.

San Cataldo is 15km from the center of Lecce, so this is a popular cruising beach.

Take the SP364 (exit 7A/B) from the Lecce Tangenziale to San Cataldo. At the lighthouse turn left towards “Darsena”. Take the 2nd right off Via Palinuro to the head of a small fishing lake. Park there then head to the beach. The nudist area is located about 1.5km north (turn left when you reach the beach), the gay section a little further on.

Busiest during the summer months, peaking in July and August.

Porto Selvaggio is beautiful. But getting to the gay beach is hard work. However, it is one of Puglia’s best known and among our region’s top 5.

Some of the rockiest, most jagged coast, and few flatter shelves to lie out on comfortably.

If you love nature at its most authentic, and a sense of isolation by all means try it out. But if cruising trumps nature, you might have more fun staying in Gallipoli.

We will be visiting in 2023 when we will bring you the latest.

Where are Puglia’s best gay beaches

Our favorite gay and nudist beaches in Puglia, in this order:

Although some gays can often be spotted bathing at Lamaforca it is, alongside the adjacent beach resort Torre Pozzelle, mainly a cruising spot.

The Puglia Guys guides to Puglia are written from Puglia by local residents. Most of the team are Italians who have lived in Puglia for many years. Some were born here.

Where are Puglia’s best beaches


Beaches on Puglia’s Ionian coast have more than a hint of the Seychelles, with multihued water and soft white sand. The Puglia Guys guides to Puglia’s best beaches, local reviews and guides, list some of Puglia’s best beaches with additional information on facilities and access.

When it comes to beaches, Puglia’s finest are in Gargano and Salento. The Gargano’s exceptional, long sandy beaches are as good as the award-winning beaches of Salento.

For those looking for fine sandy beaches during the day and a vibrant nightlife, all within walking distance, some compromise might be necessary. Whilst we have plenty of both, the combination of the two is harder to find – especially for those looking no further than the Valle d’Itria.

Vieste and Otranto are the best destinations if you want fine stretches of soft sand that you can get to on foot within a few minutes from vibrant old town hubs.

Polignano a Mare and Monopoli are often suggested for those looking for a base in the Valle d’Itria, but here sand is at a premium, with typically pebble beaches and rocky shelves. We are very happy here, but if your priority is soft sandy beaches, then neither is probably for you.

Barletta to the north of Bari and Pescoluse, the Maldive of Salento, whilst ideal for those looking to spend the day on a lounger, feel too much of a resort. The perfect combination for us would be to stay in the wonderfully quiet Santa Maria di Leuca and make the short drive to Pescoluse each day.

Tourist holiday and camping villages are popular coastal summer destinations. But these are typically self contained with a mini-market and coffee bar and an on-site pizza restaurant.

Be prepared to travel a little to discover the finest beaches by day and the most beautiful towns with wonderful bars and restaurants to explore by night.