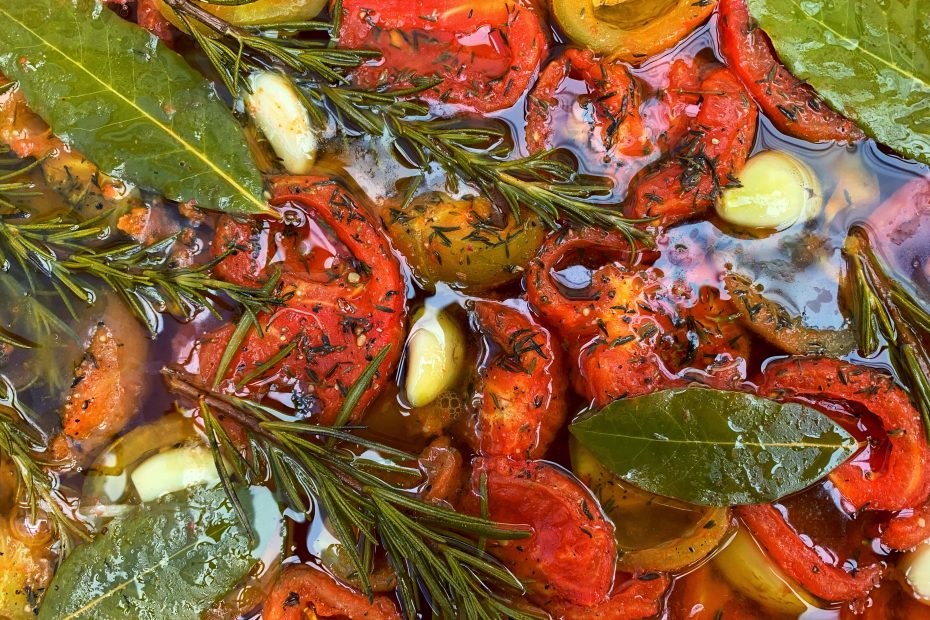 Life in the south of Italy is seasonal, marked as much by the weather as the dishes we cook. The latter is driven by the harvest from our Puglia Kitchen garden and the local produce bought from the daily market stalls in town, as also the need to move from lighter summer eating to the comforting joy of sturdier, more warming meals.

That Autumn instills a sense of melancholy isn’t surprising. The sun seems a little less golden, having assigned the responsibility of bronzing to the trees whose leaves turn in the fall. 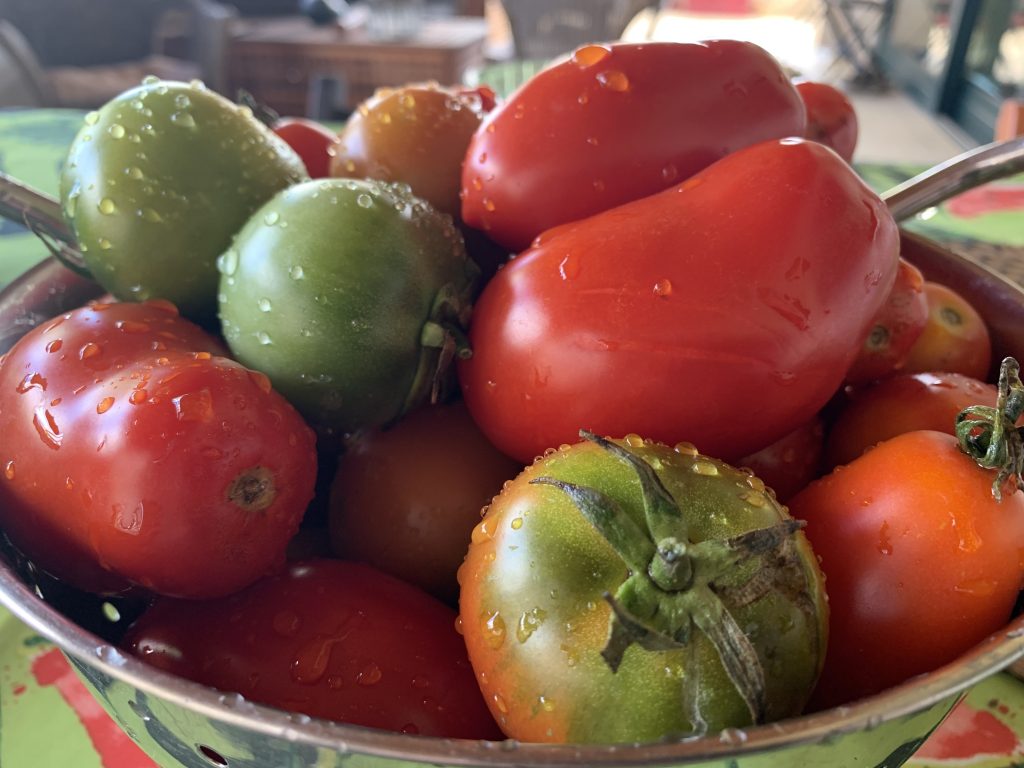 But we temper that melancholy by turning the last of our summer tomato crop into a dish that serves two purposes over the winter months to follow.  At once an instant summer memory, by scent and sight, as well as a ready made sauce to drop into our pasta of choice.

Confit is a preservation technique (“confit” means “preserve” in French) of slow-cooking under fat at a low temperature. The produce can then be stored in the cooking fat for long periods, free from spoilage.

We use the recipe as a guide. To our taste we add less sugar. We often use dried thyme instead of fresh, rolling the sprigs between our palms to shed the thyme over the tomatoes. We use as much oil as is needed to cover and fill the tomatoes. Sometimes we use the peppercorns whole, sometimes we grind them. You can also use fresh sage and/or fresh oregano.

We don’t grow our own peppers but when our neighbours bring us some we sometimes substitute a quarter of the tomatoes for 500g of red peppers which, like the tomatoes, should be skinned and seeded.

We use whatever tomatoes are available from our Puglia Kitchen garden. If we include smaller cherry tomatoes we don’t trouble to skin them.

Remove any stalks and cut a small cross at both ends of each tomato. Put them in a pan or a heatproof bowl and cover them with boiling water. Let them sit for 5 - 6 minutes, drain and peel. You can discard the skins or put them to the side to make our quick tomato sauce; the tradition of the Puglia Kitchen is that very little, if anything, goes to waste.

We usually find the skin peels from the flesh easier if you hold the tomato upside down and peel from the bottom down. If some of the skin refuses to budge don’t worry. More is gained from leaving it rather than peeling away the tomato flesh.

Slice the tomatoes in half and remove the seeds. You can use a teaspoon but we prefer to gently massage out the seeds and gel using our thumbs and fingers. The sensation of running our digits around the warm cavity of fleshy, plump tomatoes and the gentle suction the evacuation of the seeds causes is not unpleasant. Discard the seeds (or put them aside with the skins).

Tightly pack the tomatoes in a roasting tin, cut side up. Next push the sprigs of fresh rosemary and thyme, the bay leaves and the garlic in between. To release more flavour press down firmly on the peeled garlic cloves using the side of a knife or the palm of your hand so they burst open, trying to keep each clove in one piece.

Season generously with sea salt and crushed black pepper and sprinkle over the sugar if using. Cover your tomatoes with the olive oil. Using the back of a fork gently press down so that the oil spills into the insides of the tomatoes. 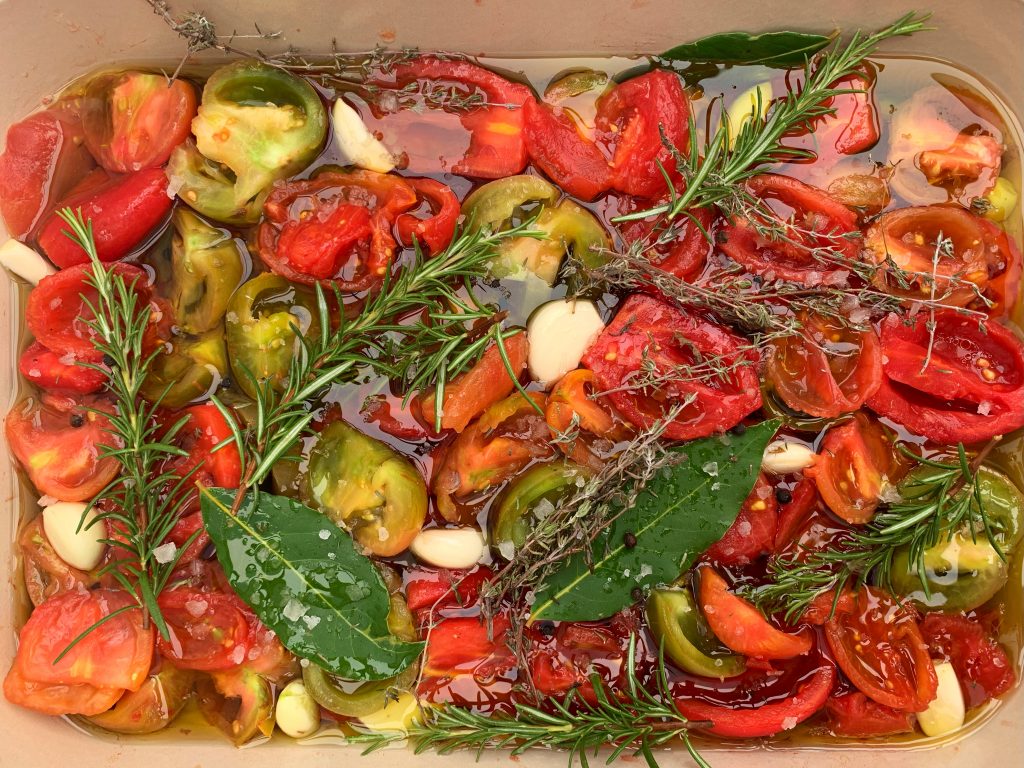 The rule of confit is low and slow. When using our fan assisted electric oven we set it to 80C. If we are using the gas oven we set it to 100C. At the higher temperature we also tend to cover the tin in foil, removing this an hour before the end of cooking.

Put the roasting tin in the oven and leave to cook gently for between 2½ - 3 hours. The glorious smell pervades the Puglia Kitchen as the herbs infuse the oil and the tomatoes cook. The cooking is done when the tomatoes are translucent and soft with golden edges.

When the confit is ready, remove the rosemary and thyme sprigs and the bay. Then, while the oil is still hot, spoon into sterlilised storage jars topping up with the oil, seal and store in a cool, dark space.

Once opened, store in the fridge. Don’t worry if the oil solidifies in the fridge. It will return to normal at room temperature and is perfectly good.

Sometimes we vary the cooking to change the flavour. By cooking uncovered for the first two hours or so, the edges of the tomatoes will start to brown and crisp, especially in the hotter oven. We typically do this when using the red peppers in the recipe. The peppers are first charred under the grill to remove their skins. A spoonful or two of the “burnt” confit adds a smokiness to our regular tomato sugo which works especially well in late autumn and winter when the air is scented with burning olive wood.

The quantities used typically fills 3x500g jars, with seasoned oil left over - which we bottle and flavour with herbs to drizzle over pizza. Or we use some in our quick tomato sauce made from the left over skins and seeds.

Waste not want not

The tradition of the Puglia Kitchen is that little goes to waste and we can make something out of almost nothing. So the discarded skins and seeds make a quick tomato sauce. The intent is to use up what is left over, but you can upscale the sauce with other ingredients. We tend to use whatever we have lying around or needs to be used, including any left over onion. 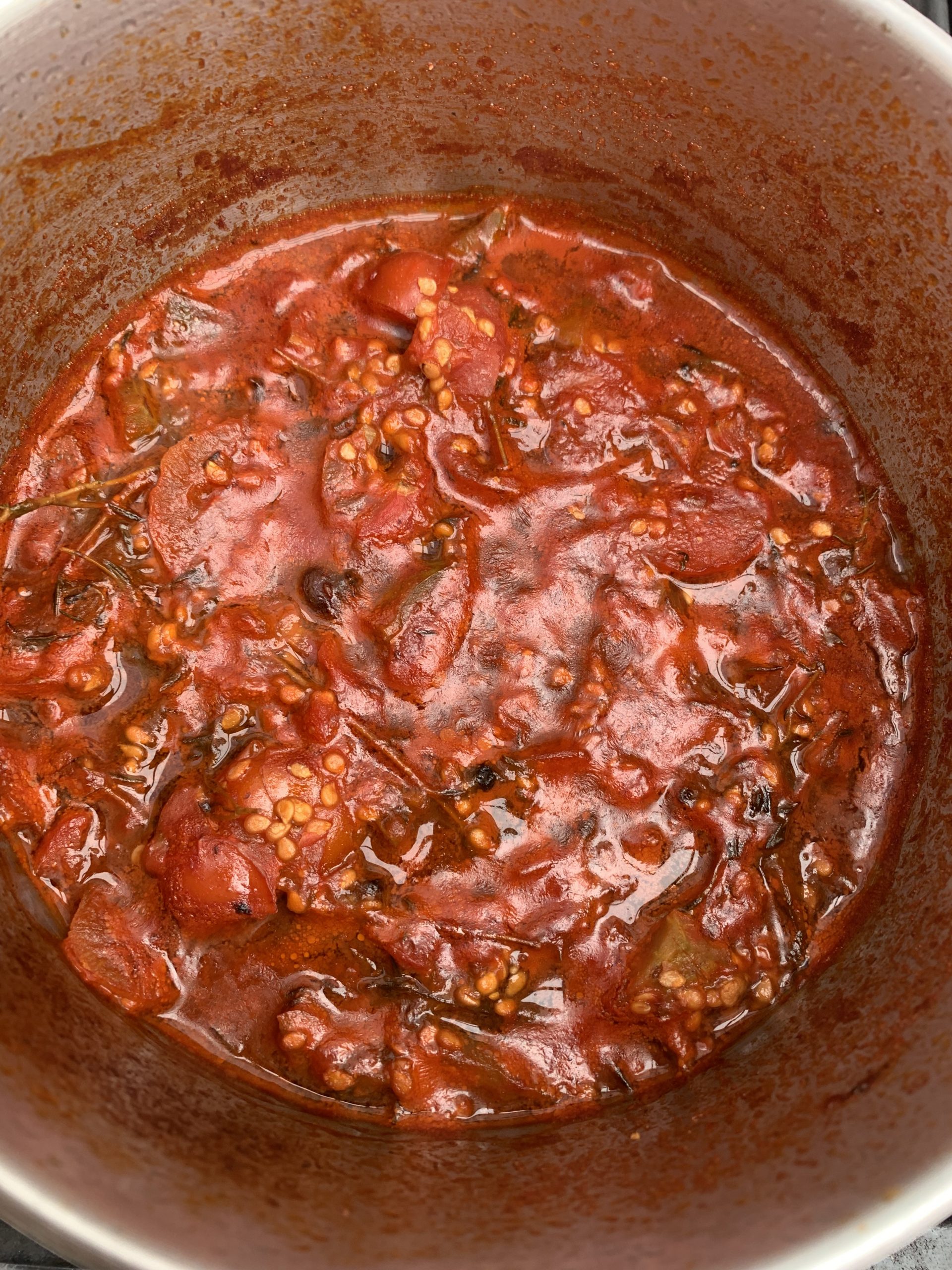 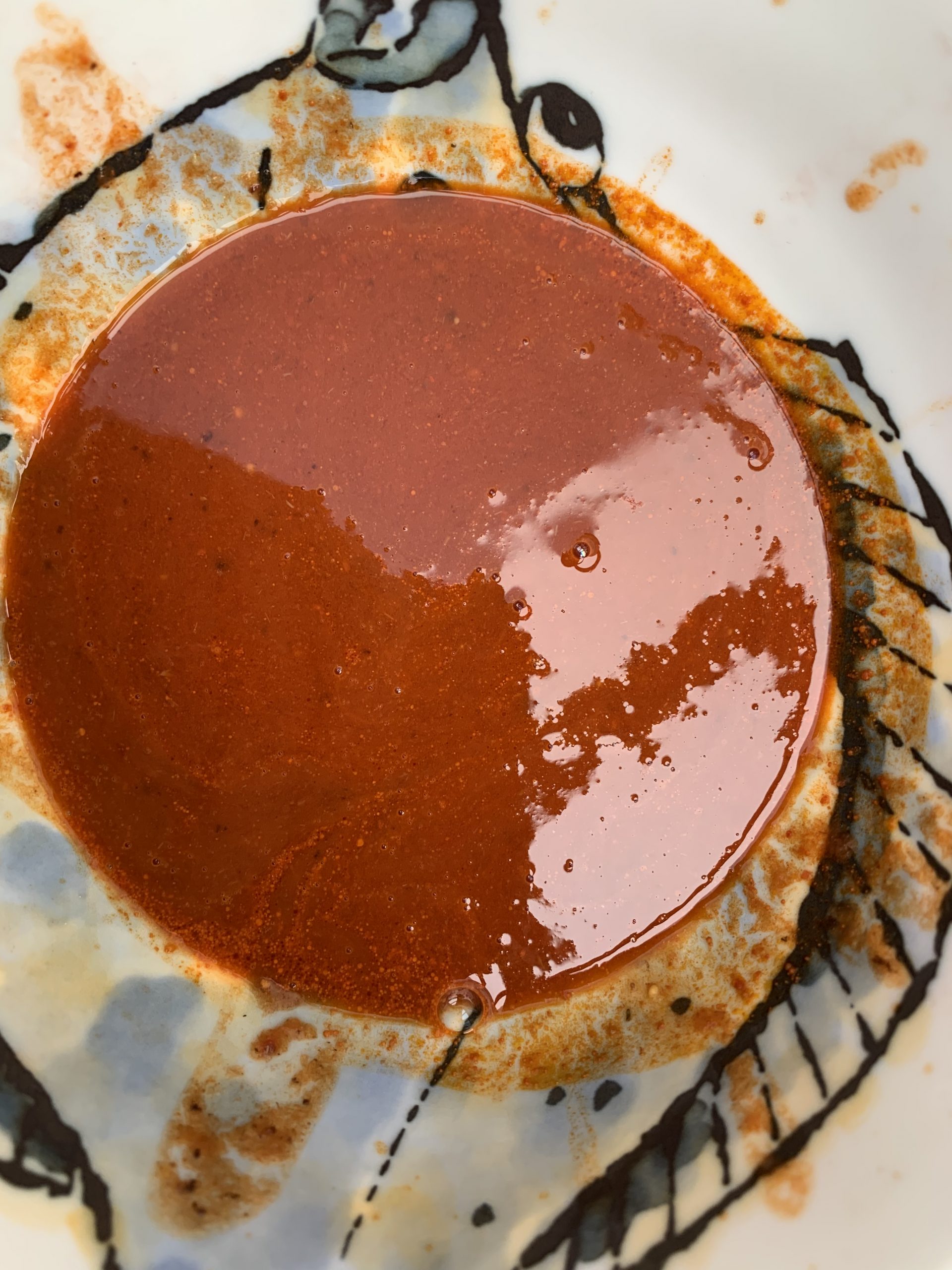 Add a little olive oil to a pan. We season the oil with 2-3 anchovy fillets. Once melted down lightly sauté a roughly chopped onion if using and then add the discarded tomato skins, seeds and liquid. Add any herbs of choice and a drizzle of red wine or balsamic vinegar and allow to reduce for 30 - 40 minutes. Season with salt and pepper and pass through a sieve. We use the rotary mill we make our passata with. We add some more olive oil - typically with some left over from the confit after the jars are filled - and we have an instant light tomato sauce for our next plate of pasta.

Alternatively this sauce is perfect for slow cooking involtini and polpette