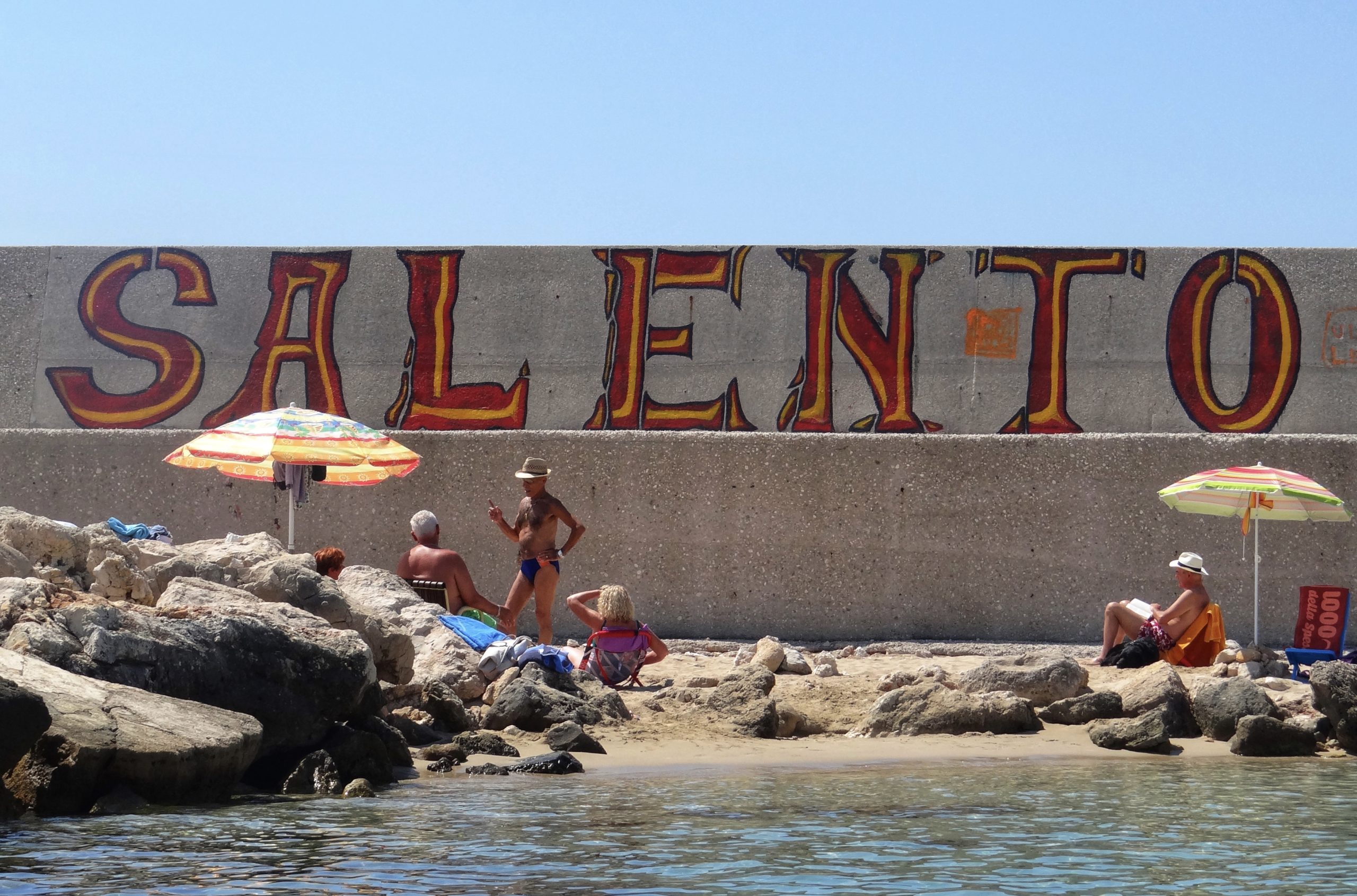 Italians have been coming to Puglia on their extended summer vacation for many years, drawn by the sun, sea and seriously good food.

Salento forms Puglia’s southern tip, extending from Taranto on the west cost of the peninsula and Ostuni towards the east, all the way south to the stunning yet sleepy Santa Maria di Leuca.

Steeped in history, Salento’s Greek, Roman, Byzantine and Saracen heritage is still evident, from the Moorish palaces of Santa Cesarea Terme to the pre-Ottoman elements of Otranto’s cathedral with its stunning mosaics and the Roman amphitheatres of Lecce, the baroque jewel of Salento.

Such cultural riches are complimented by the natural riches of Salento’s two coasts. The Adriatic, with golden sandy stretches of unspoilt beach alternating with rocky shelves and jagged coves, and the calm (usually) cloudless Ionian with its white sands and azure waters.

As each hot, lazy day fades into warm, balmy evening the lidos transform into beach clubs with international DJs playing front of crowd and the focus shifts to hip cocktail bars, beach parties and clubbing.

That Salento attracts so many gay tourists is not surprising: dry, hot summers combined with endless beaches (Puglia has around 500 miles of coast - 80% of which is accessible - the longest of any of Italy’s mainland regions); a string of picturesque and dramatic medieval towns, “exceptional” cuisine and a sophisticated nightlife.

Yet most of Salento remains rugged and unspoilt. It feels laid-back, even sleepy. And for the moment at least inexpensive and off the main tourist radar, despite easy access via two international airports.

What to do? The Big Gay Podcast from Puglia recommendations:

Visit the beach at Torre Guaceto

Located between Ostuni and Brindisi the beach is situated within a nature reserve. As such it has limited access by car, although it is accessible to disabled travellers.

The privacy this affords makes parts of Torre Guaceto extremely popular for nudists and as a gay beach. But be warned, the gay beach is some distance from the main car park. Around 50 minutes south from Penna Grossa, itself a 10 minute walk from the parking area.

Amble through the narrow streets of Lecce’s old town

Entering the old town from the Porta Rudiae takes you directly to the Piazza del Duomo, for the Cattedrale di Leccewith its double facade and five-storey bell tower, the Sant’Oronzo Column, a Roman column topped with a bronze statue of the city’s patron saint, and the sunken Roman amphitheatre.

No trip to Lecce would be complete without enjoying a pasticciotto - a short crust pastry filled with a lemon-flavoured custard (alternatively with fillings of chocolate, pistachio or vanilla custard, fruit preserves or Nutella) and caffè leccese, a shot of espresso served over ice with almond syrup.

Swim in the Grotta della Poesia

Jump into the crystal clear waters of this natural swimming pool formed in the rock.

Located only 30 minutes from Lecce by car Grotta della Poesia (the Cave of Poetry) is part of the archeological site of Roca Vecchia.

With soft, white sand, crystal clear sea and gently undulating dunes dappled with maquis scrub, the Spiaggia delle Due Sorelle (Two Sisters beach) is accessed by walking through the pine grove behind it.

Overlooked by the ruins of the Torre dell’Orso (the Bear Tower) it is one of the most beautiful beaches in Puglia with its stunning natural rock formations. Dominating the view from the beach are two sea stacks - the Two Sisters - according to legend, two dutiful and innocent sisters transformed by the gods into two beautiful rocky stacks in the middle of the sea to save them from drowning so they could be together forever.

Drive along the coast to Santa Maria di Leuca, where the Adriatic meets the Ionian Sea

Spend a couple of hours enjoying a stunning and leisurely drive along the coast, taking in Otranto, Santa Cesarae Terme, Castro, Porto Tricase and Marina Serra.

Take a short detour to Tricase to visit the Farmacia Balboa, the old town pharmacy sympathetically transformed into a trendy cocktail bar where you might spot co-owner Dame Helen Mirren, who has a home in the neighbouring town of Tiggiano.

Along the way stop off at any of the amazing restaurants and trattorie, serving locally caught fresh seafood.    Try the frittatura a selection of fried seafood at the splendid Lido AlbaChiara in Santa Maria di Leuca where you can enjoy the view out over the azure waters while watching local teenagers snorkelling for octopus and urchins.

Most of the scene takes place at the lidos and beach clubs immediately south of the town.

The LED Cafè can now be found at LED Beach on the lungomare along Lido Pôr do Sol, Baia Verde. Gay owned and run, it is an extremely popular gay destination, but as with most venues, is frequented by a mixed crowd.

Located approximately 10km south of Gallipoli (about a 12 minute drive, with around 1,500 parking spaces available), Picador Village are the self-proclaimed largest gay disco in southern Italy, albeit with a mixed clientelle on most evenings.

Surrounded by olive and palm trees, Picador is a fun location where you can expect drag queens, go-go boys and long hot summer nights. It is relatively expensive as Salento goes - welcome to Gallipoli!

One to avoid. G Beach Club used to be one of the most popular gay destinations in Gallipoli . Following a change of management they have become less gay friendly - asking 2 gay couples who were kissing to leave, with accusations of homophobia. We also have direct experience of them asking us to remove #gay tags and pictures from our social media.

Don’t forget the rest of Puglia!

Although the best beaches can be found in the Salento, perhaps Puglia’s most iconic beach is at Polignano a Mare. Have a swim there before taking the short drive to its less busy neighbour Monopoli for lunch at one of the restaurants on Piazza Giuseppe Garibaldi by the old port.

With many destinations off the beaten-track, and effective public transport serving only the main cities, car-hire is a must for travelling around Puglia.

Italy is considered a gay-friendly country. Whilst LGBT people may still encounter homophobia, public opinion on homosexuality is increasingly tolerant. LGBT rights have changed significantly over the last few years. Same sex unions have been recognised since 2016 although Italy, unlike many other western European countries, still does not have equal marriage.