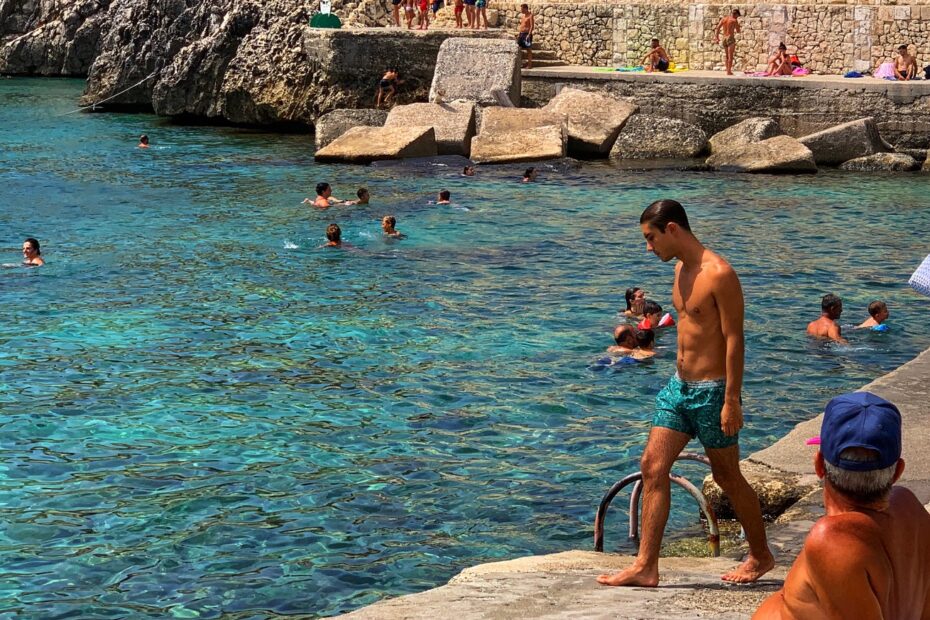 The drive along the coastal route from Santa Cesarea Terme to Santa Maria di Leuca is one of our favorite #WeAreInPuglia journeys. The route is one of the most dramatic in Puglia, sandwiched between prickly pear lined cliffs and shimmering sea.

Our first stop, only some 7 km from Santa Cesarea, is Castro. A small Salento seaside town with a picturesque harbor. A public beach with rocky shelves and concrete piers, popular with locals and visitors all summer long.

Bars, restaurants and cafés extend along the seafront.

Hire a boat or take an organised trip along the coastline for the sea caves. The Zinzulusa Caves are particularly well known.

The harbor is still a working one. Fishermen land their catch and dry their nets. In summer fishing boats are joined by expensive yachts and power boats.

Nearby roadside pay parking is available. Expect to drive around to find a spot!

From Troy to Rome via Castro

In Book III of the Aeneid, Virgil recounts how Aeneas sailed from Troy to Italy and became the progenitor of the Roman people. He described the landing spot as “a port dominated by a high promontory with a majestic temple on top consecrated to the goddess Minerva”.

Based on the epic and the latest archaeological studies – recent excavations have discovered such a temple – Castrum Minervae, the Roman name for Castro, Minerva being the Roman equivalent of the Greek goddess Athena, Aeneas is believed to have landed in Castro.

How to get there

Continue along the SP358 coastal road from Santa Cesarea Terme to Castro. You will pass through Castro. On the way back out of Castro where the road twists 180 degrees, instead of continuing to Leuca, take the road down to Castro Marina (signed).

Park wherever you can find a spot!