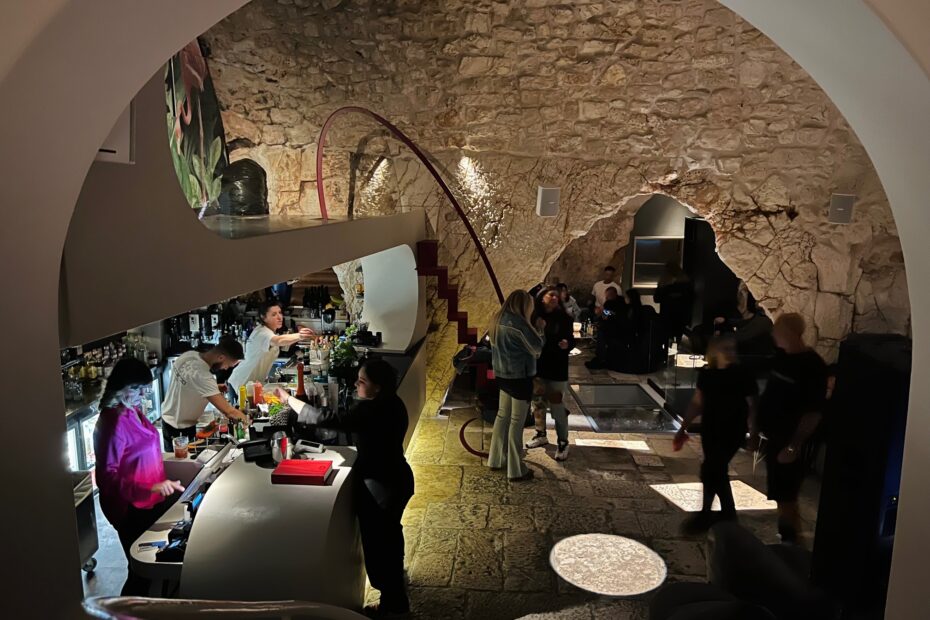 Riccardo Caffè Ostuni where we were charged more than the displayed menu price and felt physically threatened when we queried the overcharging, before being asked to leave.

We all hate tourist traps, dishonest restaurant proprietors who overcharge visitors and rogue taxi drivers whose meter stays switched off.

As we travel around Puglia about 99.3% of our experiences are positive. Four of the Puglia Guys are Puglia born and bred. Three have lived here all their lives. You might think that we are tamper proof. But it’s not only tourists who can be taken for a ride…

The story of the Ostuni “scontrino pazzo” crazy bar charge was big local news this summer. An unnamed Ostuni bar asked a customer to pay 62€ for 3 coffees, one granita and 3 tonic waters with lemon granita. When the customer, from Bari, threatened to report this to finance police - the “receipt” given did not include the bar’s official tax code which is a legal requirement - the owner immediately halved the bill.

A couple of weeks ago we had our own “scontrino pazzo” event in Ostuni, at Riccardo Caffè, on the far side of the old town, Via Gaetano Tanzarella Vitale, 61 - just along from Osteria Del Tempo Perso. We were asked to pay more than the displayed menu price (as we understand it an illegal practice) and charged for unexpected extras.

And when we queried the overcharging our experience became an altogether darker unpleasant experience.

Riccardo Caffè is not a bar we would normally visit. 6€ for a beer and 5€ for a coca~cola makes it expensive by local standards and beyond our usual budget. But a prominent position means it is popular with visitors to Ostuni. So, and somewhat ironically in the event, we had gone for the purpose of reviewing it for our guides.

On our visit we noticed that we were charged 15€ for a cocktail listed as 12€ on the displayed menu. We were also charged 2€ each for “musica”. When she saw us looking at this item, the server told that the musica was for the “live music”. The bar had a DJ. 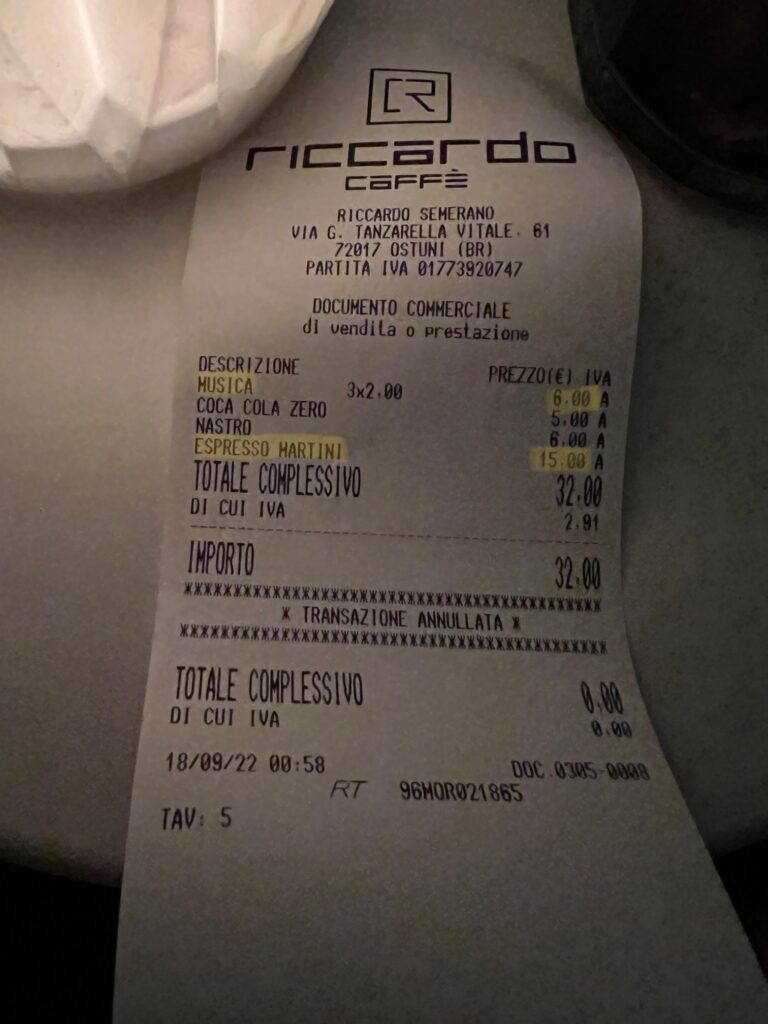 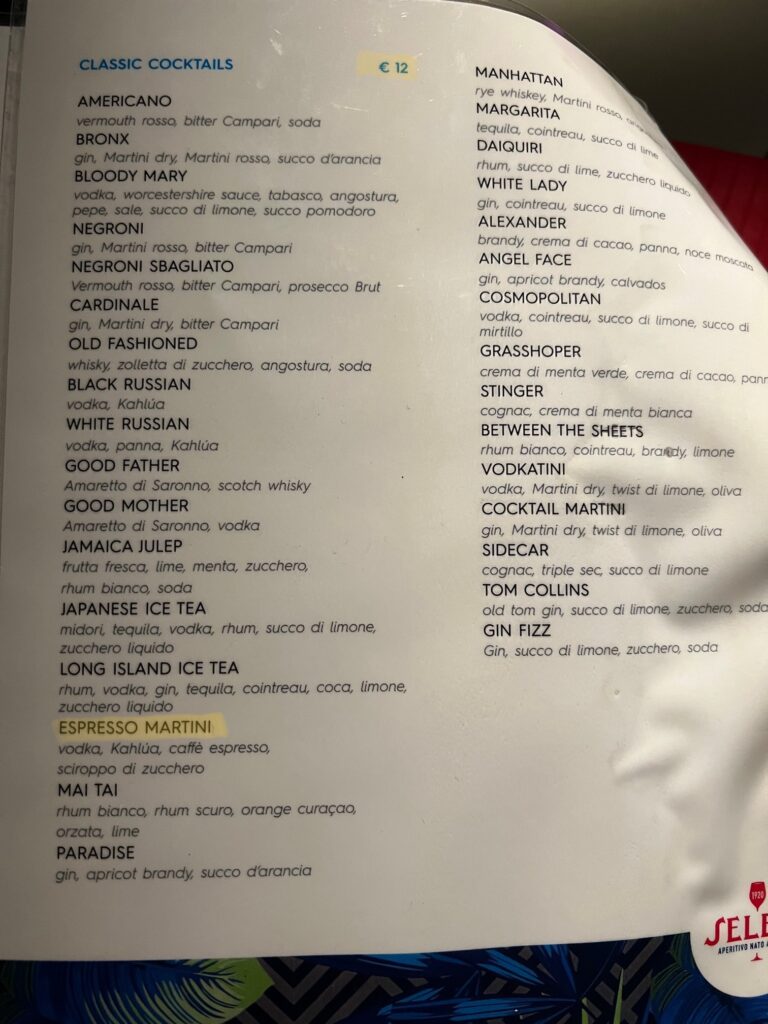 One of us went to the bar to ask why we were charged more than the displayed menu price. We were told the price on our receipt was correct (“è giusto”).

A younger “manager” approached us. When we explained our understanding that Italian law did not permit being charged more than the displayed menu prices we were first told that it was a mistake, but not our fault. We were looking at the hard copy physical menu on display in the bar. We should have scanned the QR menu using our phone which, it was explained, had the accurate prices.

When we asked the “manager” to show us the QR menu, the pricing was the same. 12€ per cocktail. Why then were we were charged 15€?

The cashier behind the bar, a more mature woman, then told us that the menu had changed. We asked when it had changed. Last night, last week? She explained that it had been changed over three months ago. 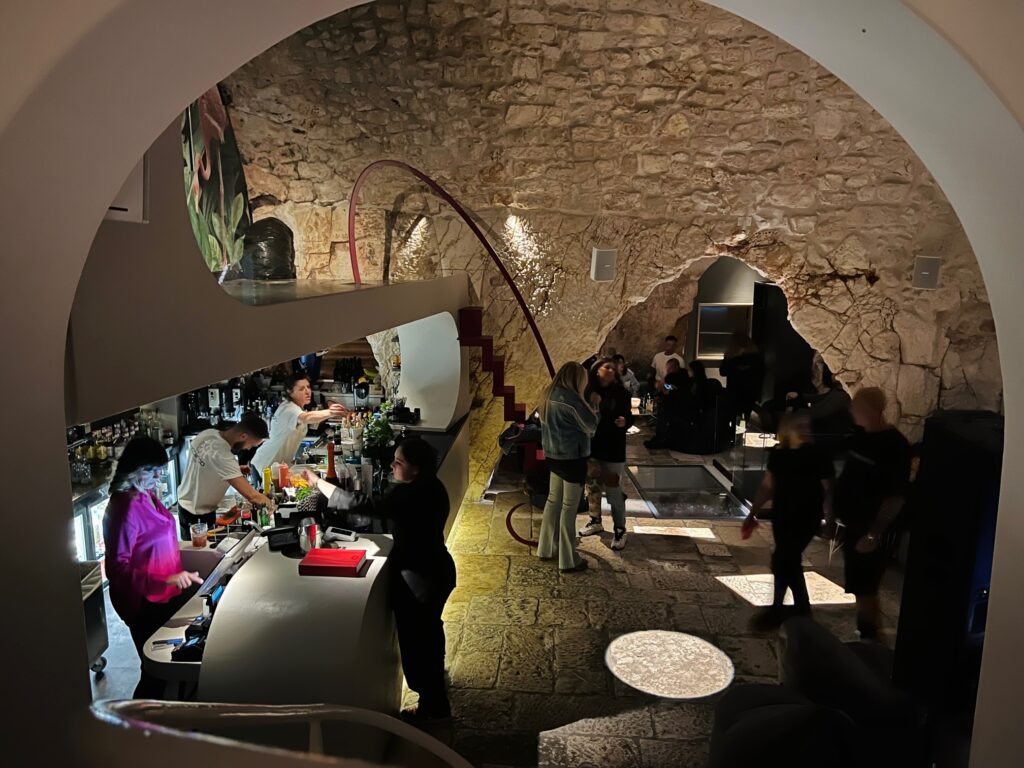 The cashier in pink at the register who tried to snatch the menu displaying the bar prices from us as we photographed it.

We then revealed the purpose of our visit, to review the bar, to the cashier and the “manager”. We asked how we should explain being overcharged the advertised displayed price, something that we understood to be illegal. As we were doing so, we took photographs of the bar menu pricing, at which point the cashier tried to snatch the menu from us.

We politely asked that she did not attempt any physical contact or challenge.

After some discussion between the cashier and the younger “manager”, a refund was slapped down on the bar. We returned to our table.

About 10 minutes later the younger “manager” came to our table and we were approached a gentleman who had introduced himself to us as “Riccardo” when we first entered the bar. “Riccardo” was clearly unhappy with us when we asked him to explain why the prices being charged were more than the displayed menu prices. He told us we had been refunded the overcharge and that should be OK. 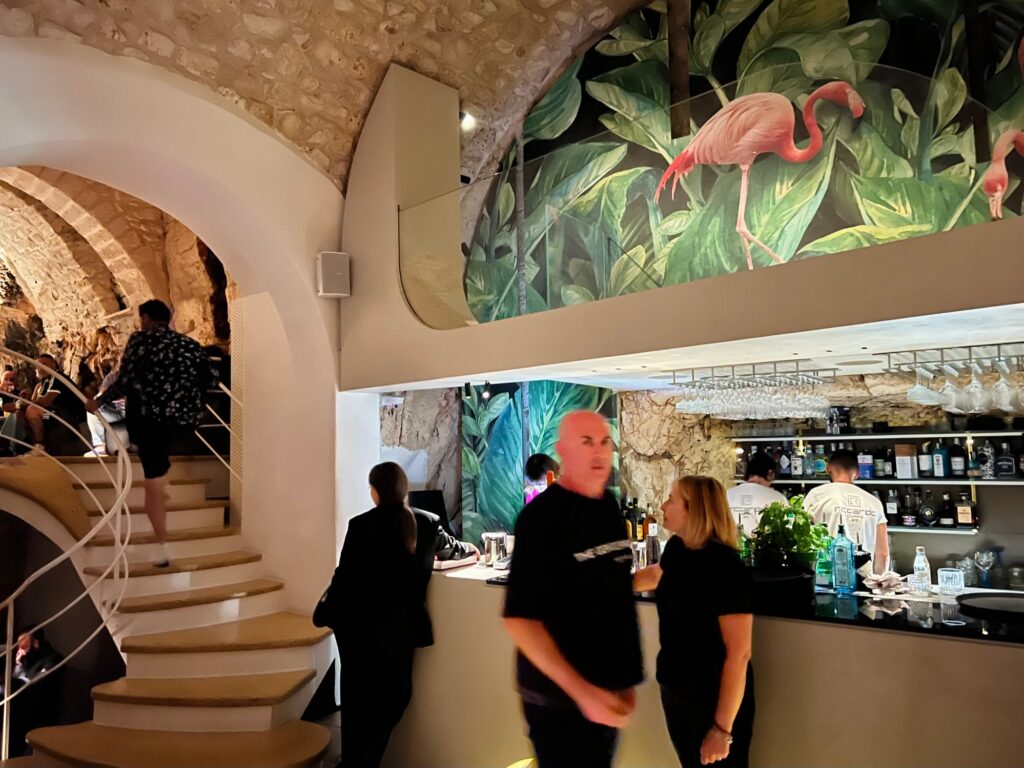 The man who identified himself as “Riccardo” became, in our opinion, aggressive and physically threatening after we queried paying more than the displayed menu prices.

We asked whether the table next to us - around 10 people who had had at least 2 rounds of cocktails while we had been sitting there - would be refunded the same overcharge. “Riccardo” became, as we experienced the situation, even less pleasant.

In what seemed to us a confrontational and threatening manner, his face directly in the writer’s (at which point my hand was placed over my mouth and nose and I asked him to please step backwards for Covid hygiene and my protection), “Riccardo’s” manner, as we experienced it, became aggressive and provoking. In the writer’s opinion, with his face directly in mine, he seemed to be taunting the writer to react physically in turn justifying physical intervention on his part.

When he asked us to leave the premises we were more than happy to do so. There was a sweet irony that he asked his door staff to come over and explained to them that we could not return.

So that’s Riccardo Caffè, Ostuni. Offering aperitifs and cocktails in a cave setting with trendy beanbag seating on the outside steps, overcharging us the displayed menu price, charging for unexpected extras and escorting us off the premises when we asked for an explanation.