2020 was not a typical year. But Puglia was still open for business over summer. We asked you to tell us what you enjoyed most.
Thank you 3,154 times for your votes. 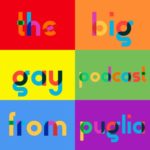 The best of Puglia Podcast

We review and discuss the nominees and winners over a pizza in Lecce.

The best of Puglia

Our poll - the first of its kind in Puglia, we believe - had three sections. The first was aimed at those of us living in Puglia. The second was for those elsewhere in Italy and abroad who had visited Puglia in 2020. The third section was for both.

Our poll included a mix of open questions such as “What was your favourite restaurant,” and those with multiple choices from shortlisted nominees with the option to vote for and name an “other”.

The shortlisted nominees were selected by a panel based on recommendations, social media engagement and our own experience over the year.

This question was aimed at visitors to Puglia, rather than those of us living here.

Gallipoli was the clear winner by some margin with 37% of the vote. Perhaps not such a surprise given that Gallipoli is still the main focus of Puglia’s summer gay scene, as reflected in the responses to other questions in our survey. 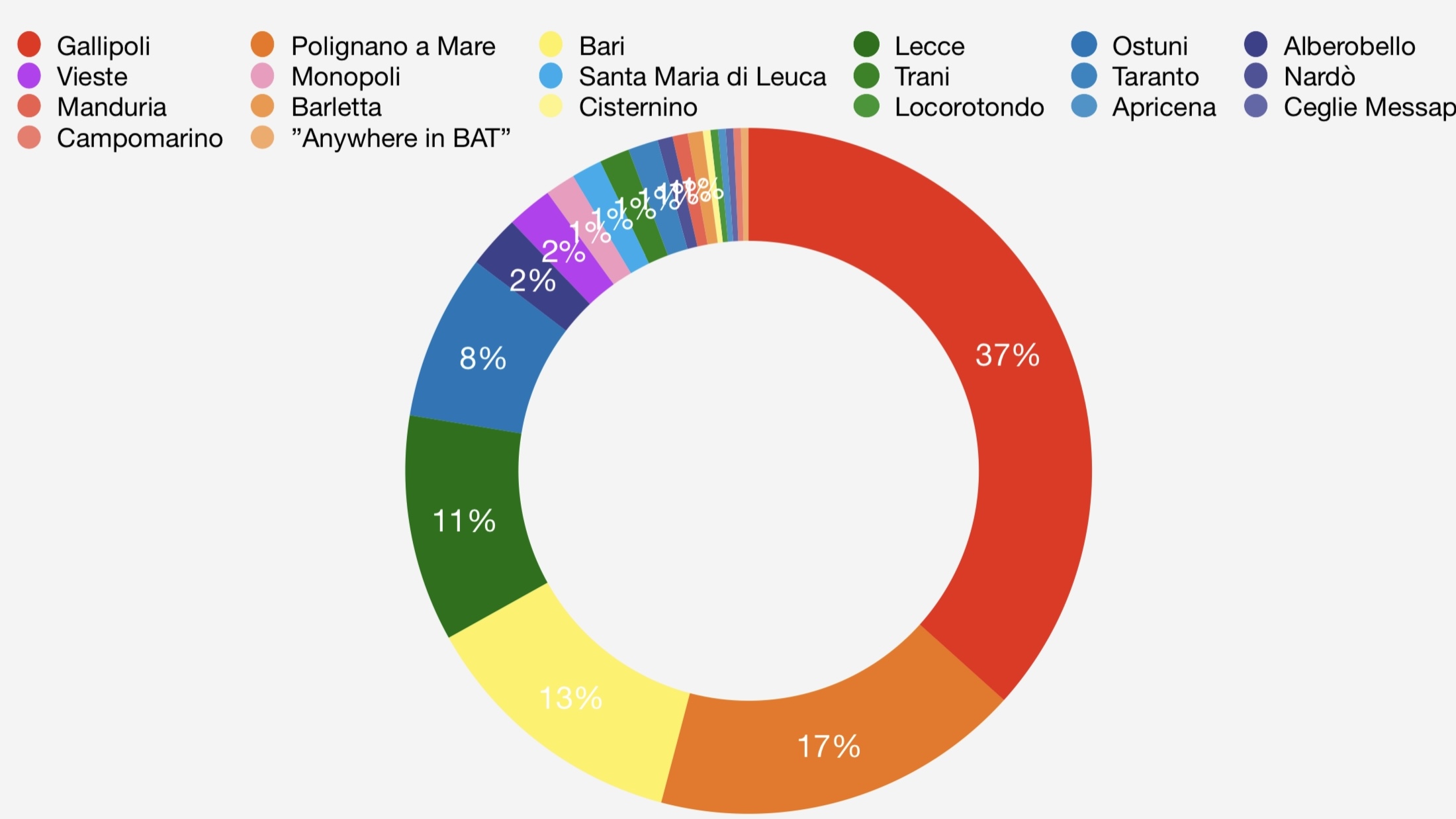 That Polignano a Mare came second is testament to its continuing iconic status. Chances are that it features on the cover of your Puglia travel guide book (unless you have the previous edition with the photo of Alberobello’s trulli).

Bari -vs- Lecce is another theme that runs across the poll. In this case “buzzing” Bari whose old town is a vibrant hub of cafés, restaurants and bars beat Lecce as your favourite tourist destination.

It was no surprise to see Ostuni coming fifth with 8% of the vote, ideally placed as it is as a base for touring around Puglia. Surprising then that Cisternino, Locorotondo and Ceglie came so far down the list, each with less than 1% of the vote.

Alberobello and Vieste tied with 2%, with Monopoli and one of our own favourite destinations, Santa Maria di Leuca, following with 1% of the vote each.

This was an open-ended question. Respondents were left to respond as they wished. With 39% Pôr do Sol in Gallipoli was your favourite. 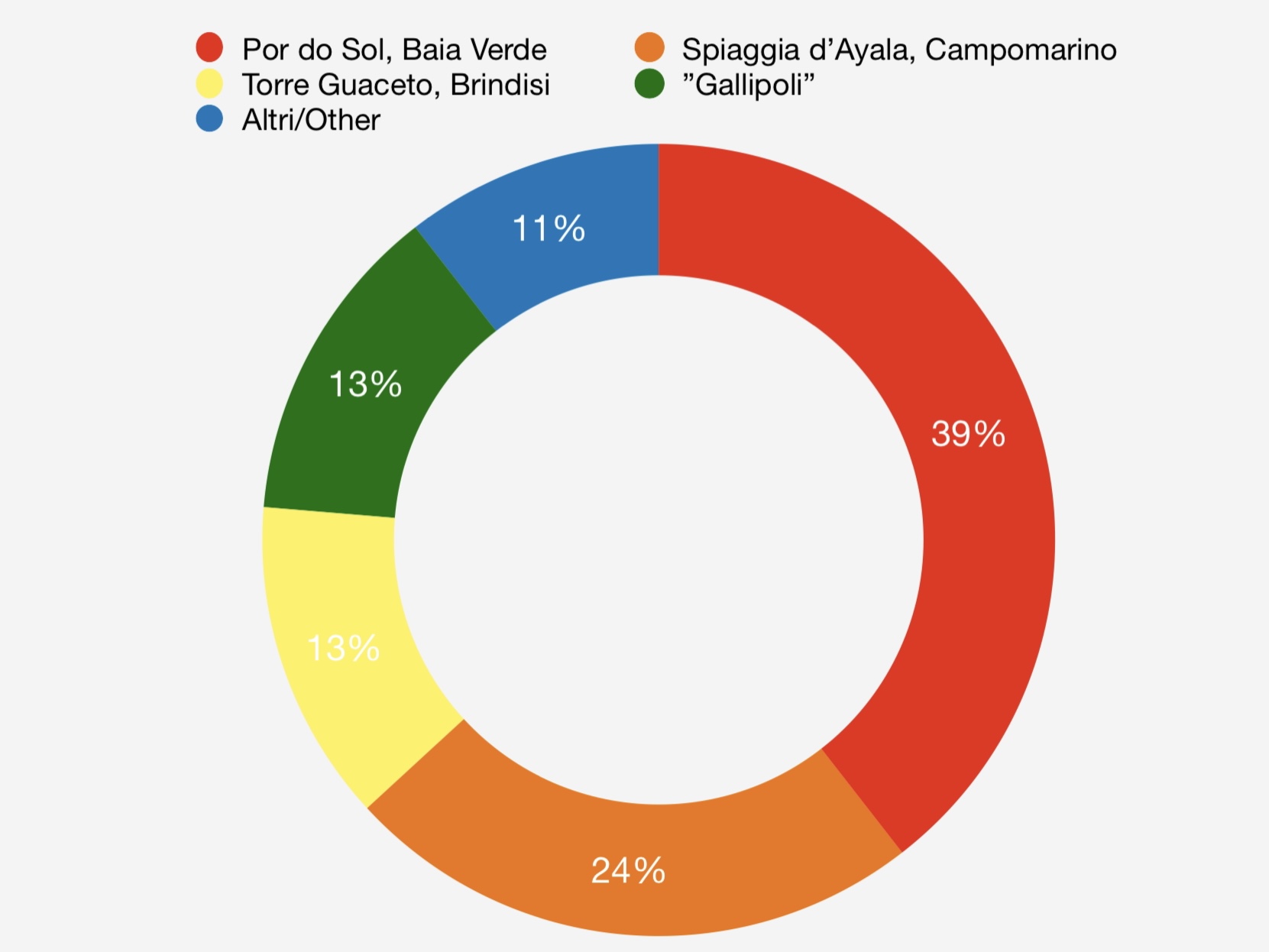 Gallipoli once again showed its pulling power as the focus of Puglia’s summer gay scene, with the lido beach club Pôr do Sol coming in top place, as well as featuring in another 13% of your responses.

Beaches from Vieste to Torre dell’Orso and from Porto Selvaggio to Punto Prosciutto all featured in your responses. With less than 5% of the vote Bari’s city beach Pane e Pomodoro narrowly missed out on being included in the results infographic above.

This was the same open-ended question but asked of those of us living in Puglia. Once again lido Pôr do Sol is your favourite. 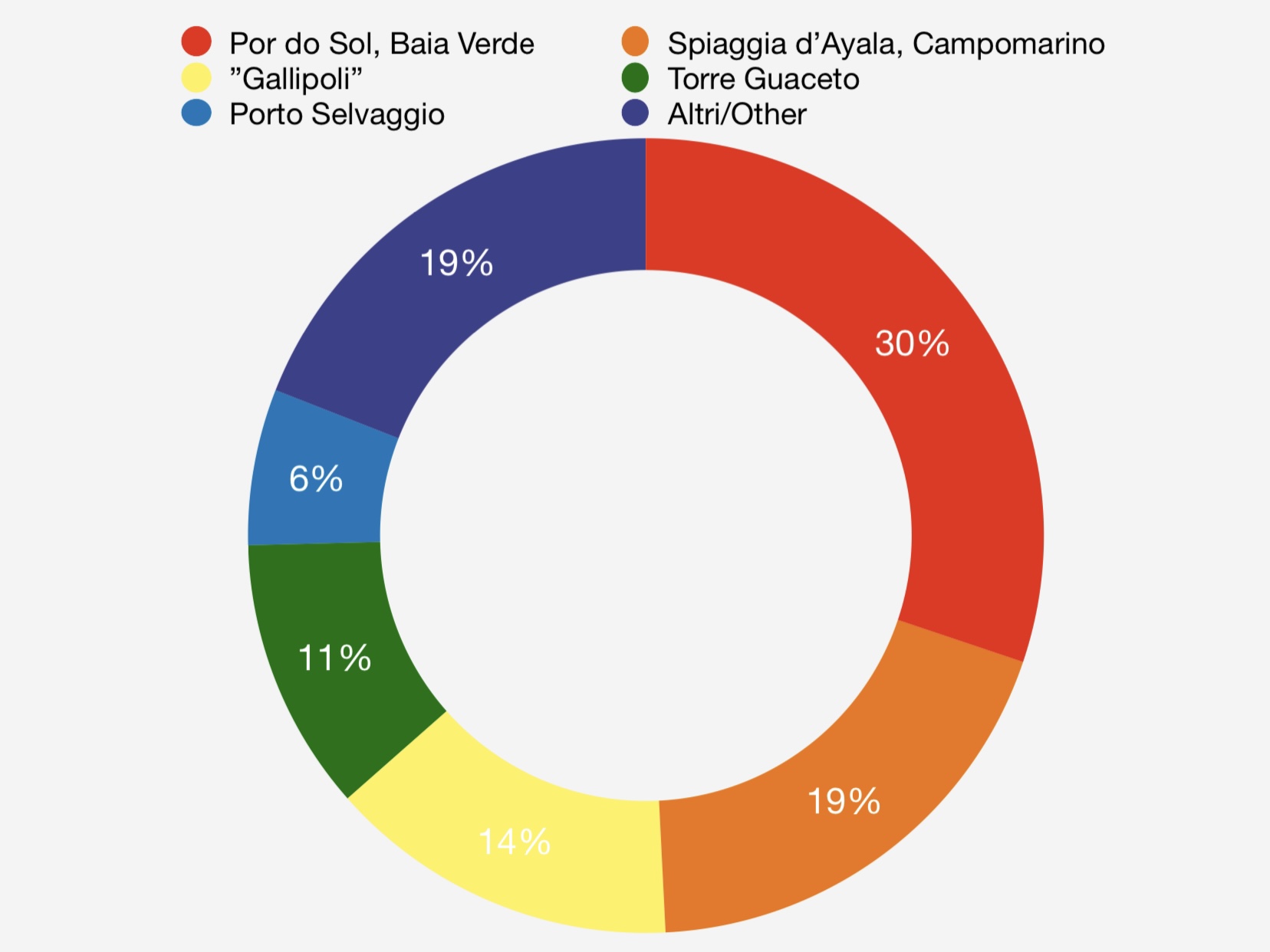 Torre Guaceto and D’Ayala were slightly less popular with those of us living in our region than with those visiting.

This and the wider selection of your “other” responses - some 19%* as compared with 11% for visitors- probably reflects a preference for staying “local”.

*25% if we include Porto Selvaggio in the category of “other” to draw a more accurate comparison with the previous question. 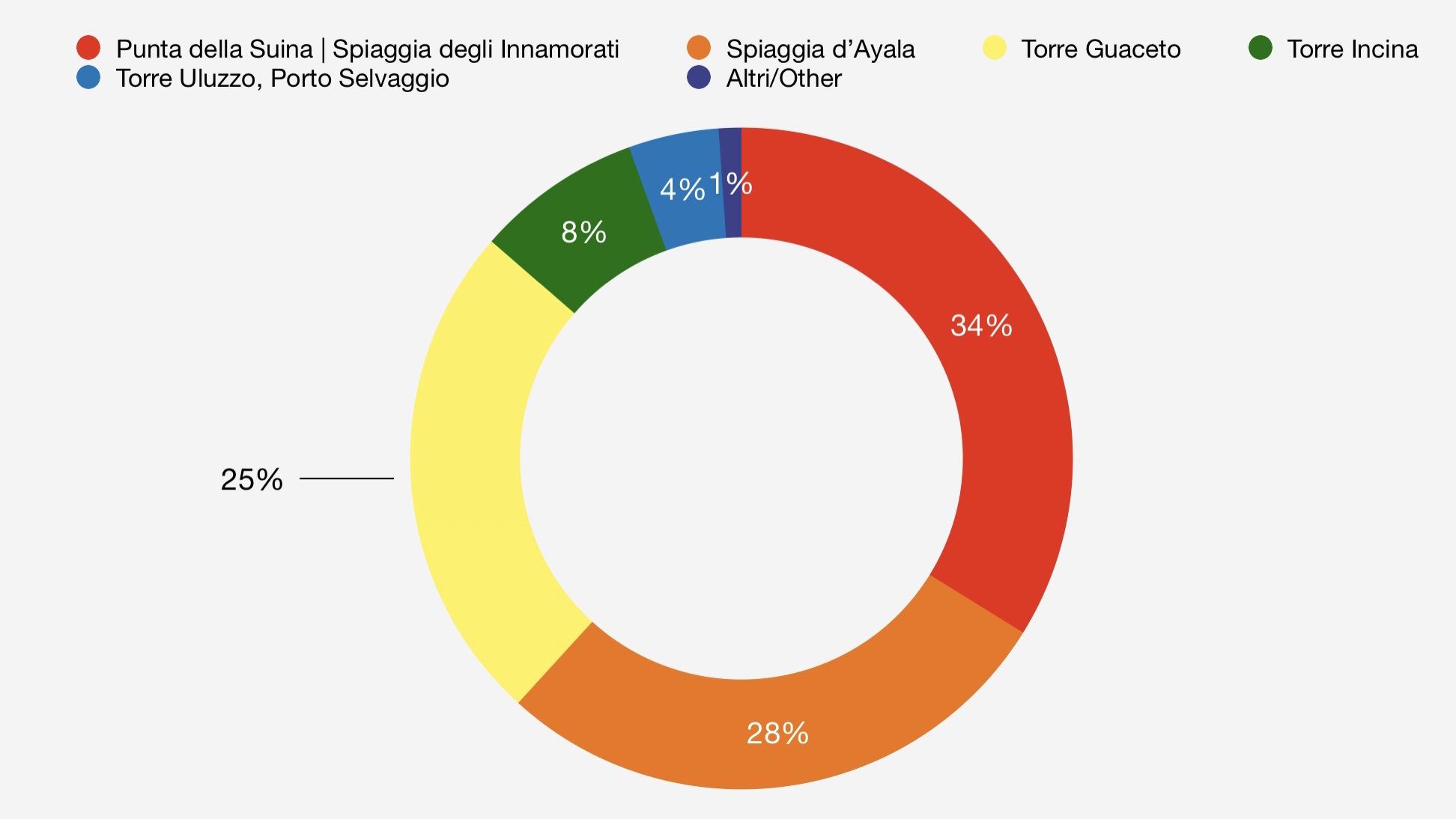 Your choice surprised us given that D’Ayala and Torre Guaceto are much more comfortable beaches, although the gay beach at Torre Guaceto is difficult to get to. Nevertheless you preferred the private, rocky coves and shelves of Punta della Suina to the golden sand and scrub of D’Ayala.

With 39% of the vote, Makumba Tribe Village was your favourite club in 2020. 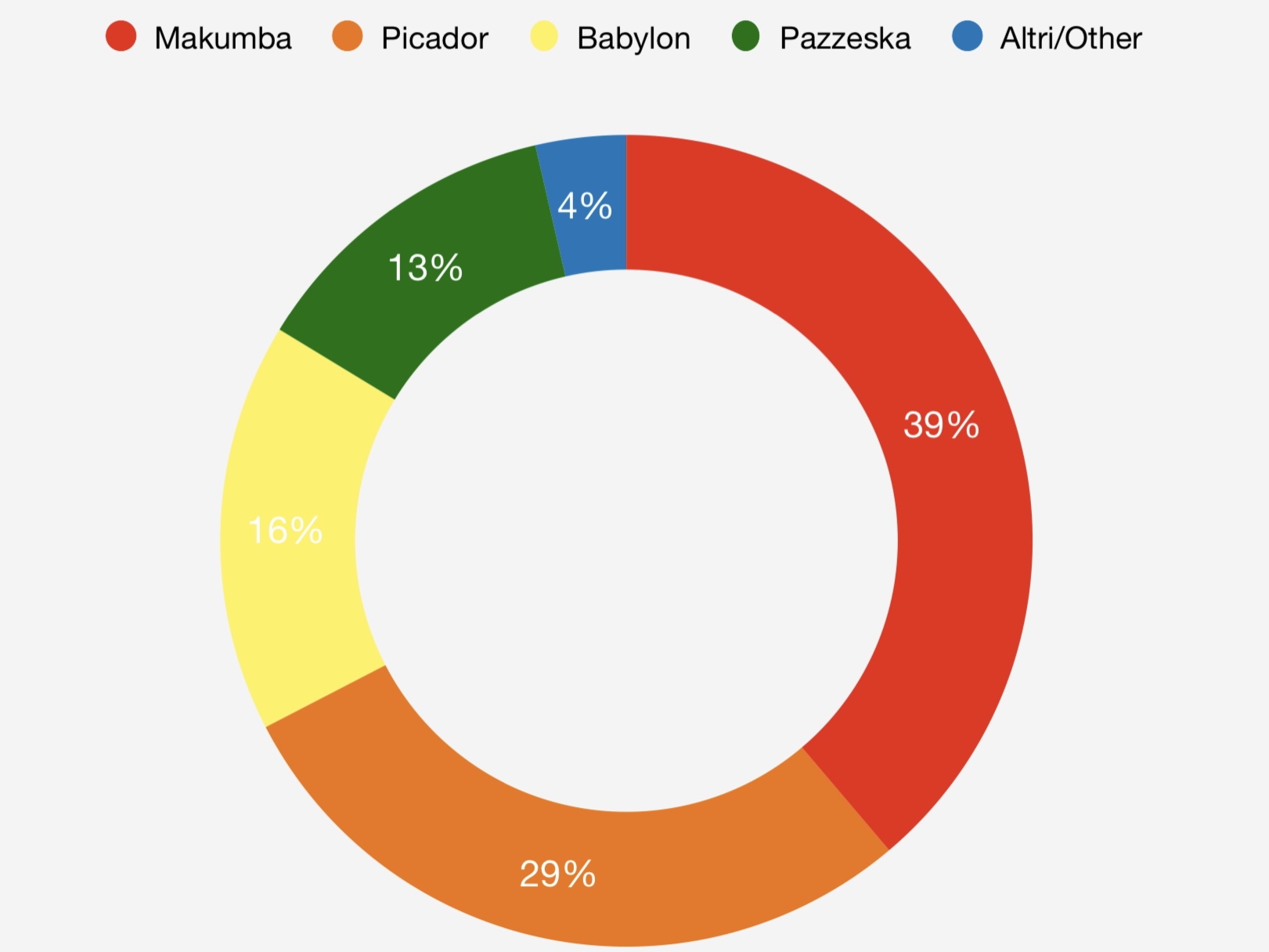 Despite Gallipoli drawing the focus for gay visitors, this was a victory for Bari province (BA) over Lecce (LE).

We are encouraged by the appearance (just outside your favourite 4 club nights) of Masseria Wave at la Restuccia - Masseria Urban (Lequile, LE). They ran a series of queer nights over summer, with other queer events taking place throughout the year. They have an exciting schedule planned for 2021, Covid19 permitting.

We celebrate diversity of all kinds so it was good to see HOTPARTY ITALY a disco and cruising night taking place usually twice a month in San Pietro Vernotico in the province of Brindisi similarly placing just outside your favourite 4.

With 33% of the vote, Sorelle Pompadur were your favourite artists in 2020. 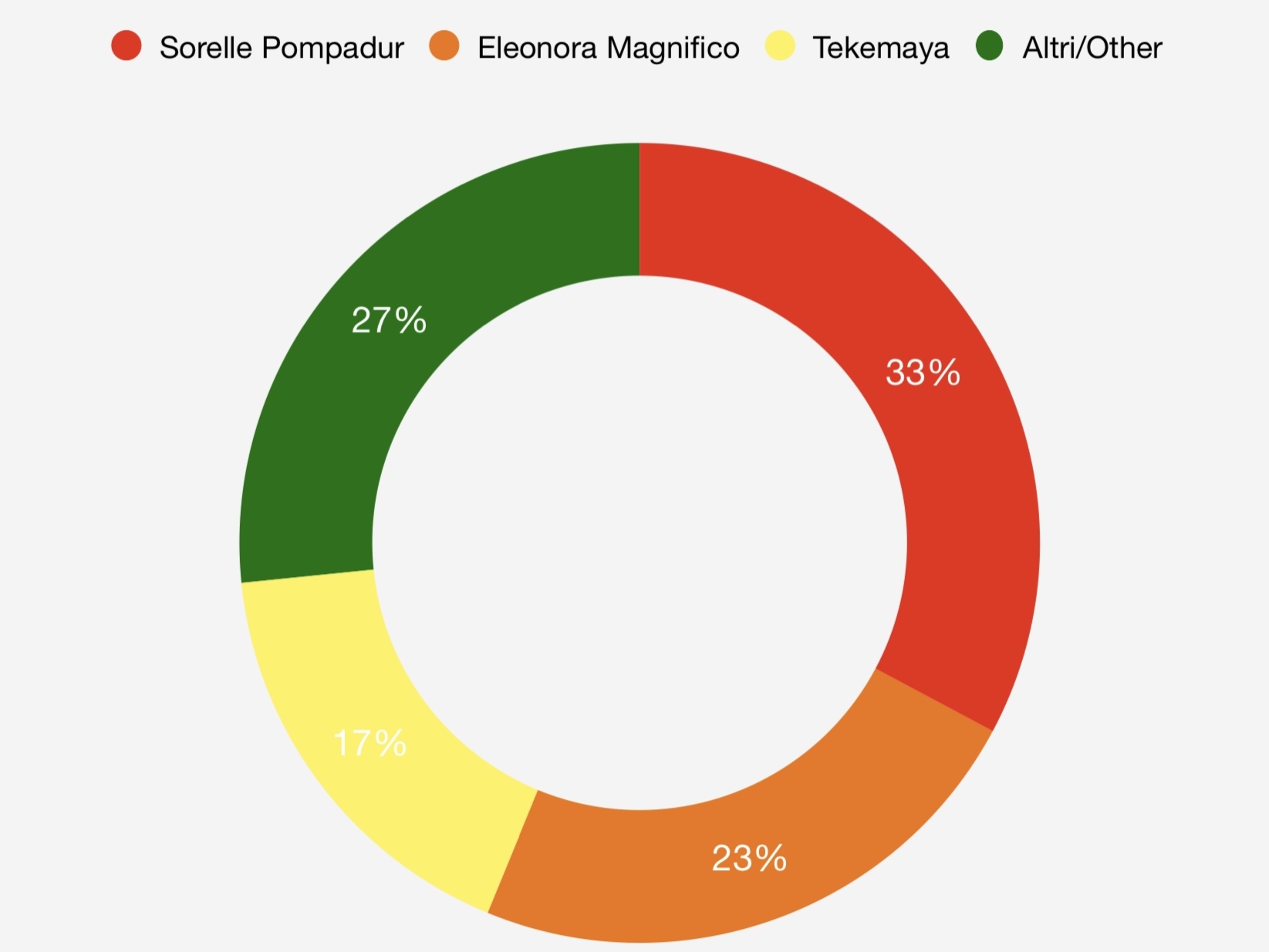 Your votes covered the spectrum of gay life in Puglia. GoGo Boy Luis/this is Luis came 4th with 11%. Behind him with 6% were RicchiToni, Bari’s inclusive LGBTQI+ choir.

This was one of the most popular categories when it came to voting for “other”. As we had to explain on quite a few occasions we didn’t miss you out! For this question we had a shortlist of nominees that were agreed upon by our selection panel.

We should point out that “favourite artist” was intended to cover those based in and regularly performing in Puglia, at bars, clubs and other LGBTQ+ friendly venues. But thanks anyway for including Negramaro.

Oh, and should anyone want to enlighten us about Pietro Salaris, that would be helpful. For future reference, of course...

With 33% of the vote your favourite LGBTQ+ was Arcigay Bari. 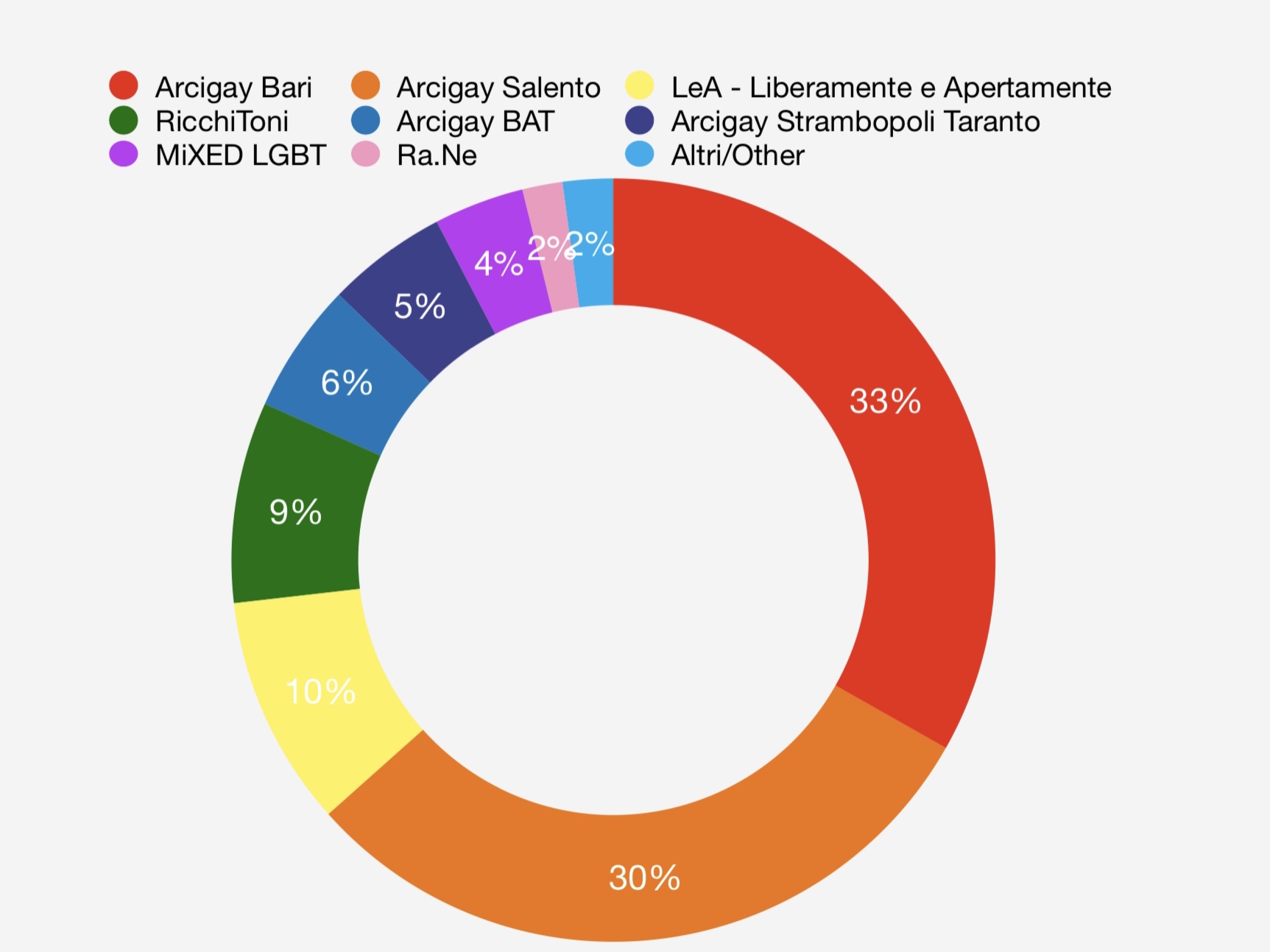 Another category that was interesting to watch as votes came in, with favourites switching once again between Bari and Lecce.

Reducing this to those provinces and assuming our maths are correct, BA still has the edge over LE with 46% of the vote (ArcigayBari + RicchiToni + MiXED) over 42% (Arcigay Salento + LeA + Ra.Ne).

Nice to see RicchiToni featuring again proving that LGBT+ choirs have an important social and support role for the community beyond performing to them.

The Bari International Gender Film Festival was your favourite cultural event in 2020. 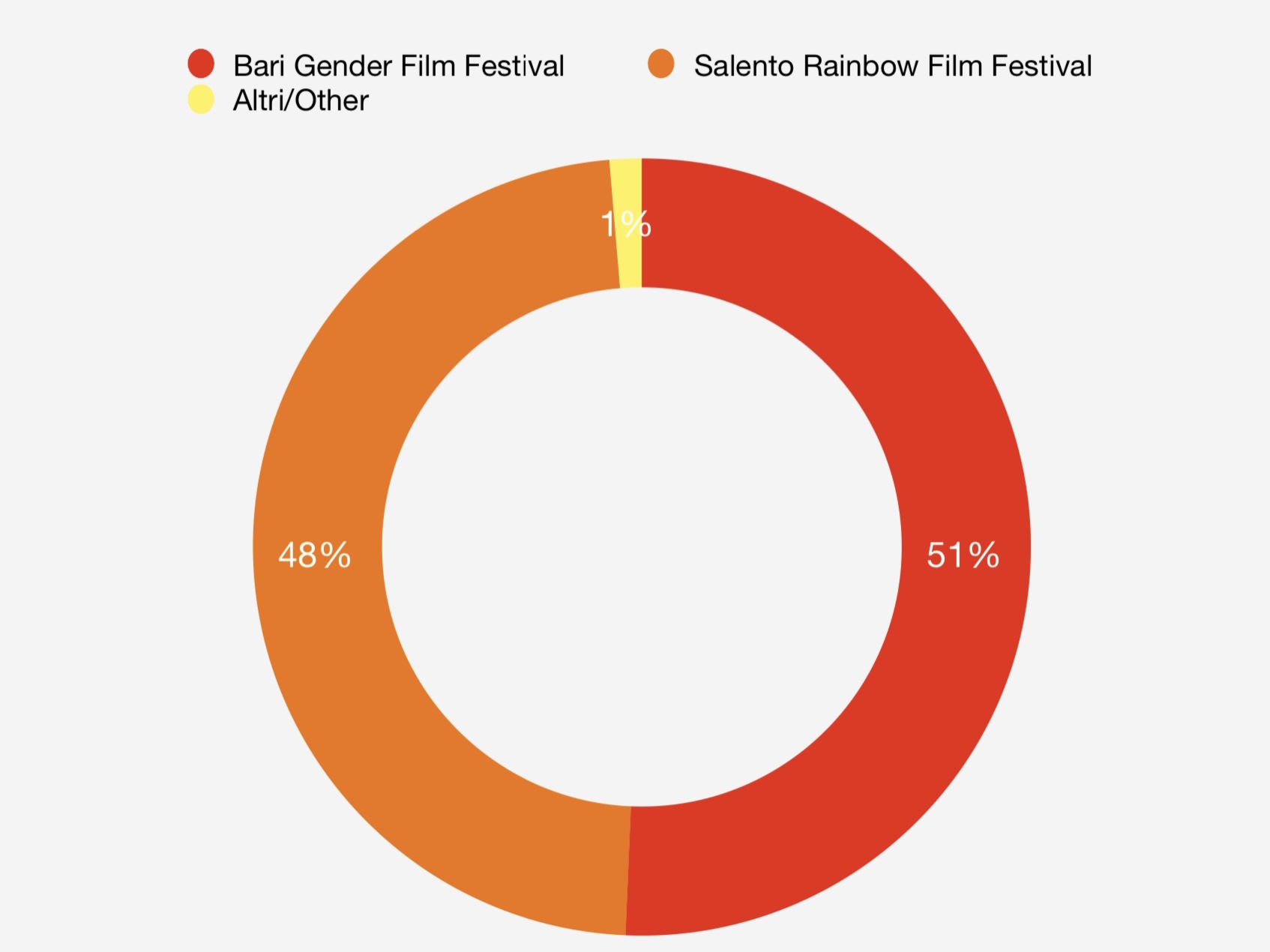 Another round of Bari -vs- Lecce. We watched with interest as votes came in and your favourite switched between Salento Rainbow Film Festival and Bari International Gender Film Festival, then back again.

Salento/Puglia Pride was what you missed most. 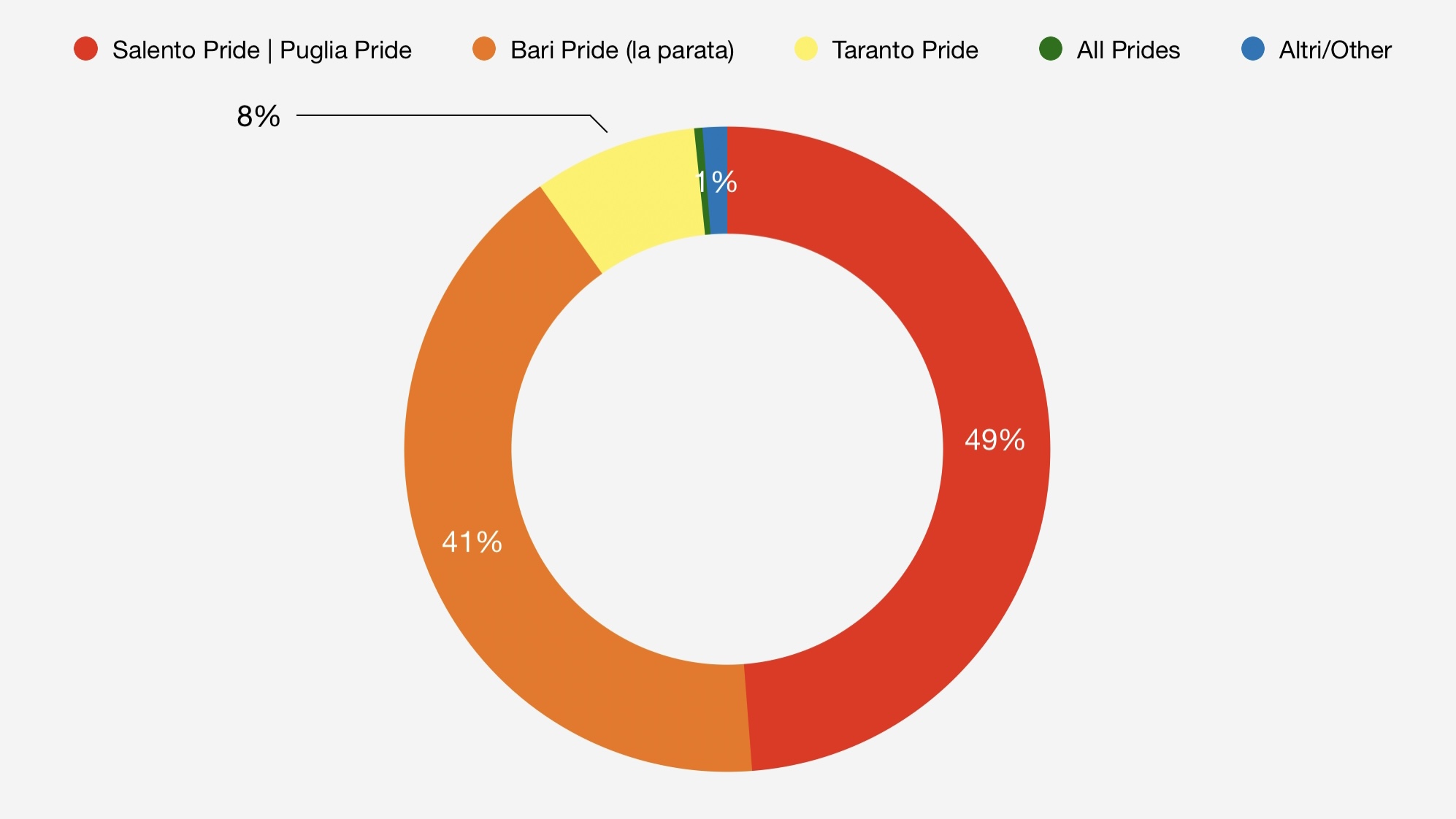 This one swung back in favour of Lecce province, with Salento/Puglia Pride taking 49% of the vote. Find out more about Puglia’s Pride events.

Once again, you chose Pôr do Sol. 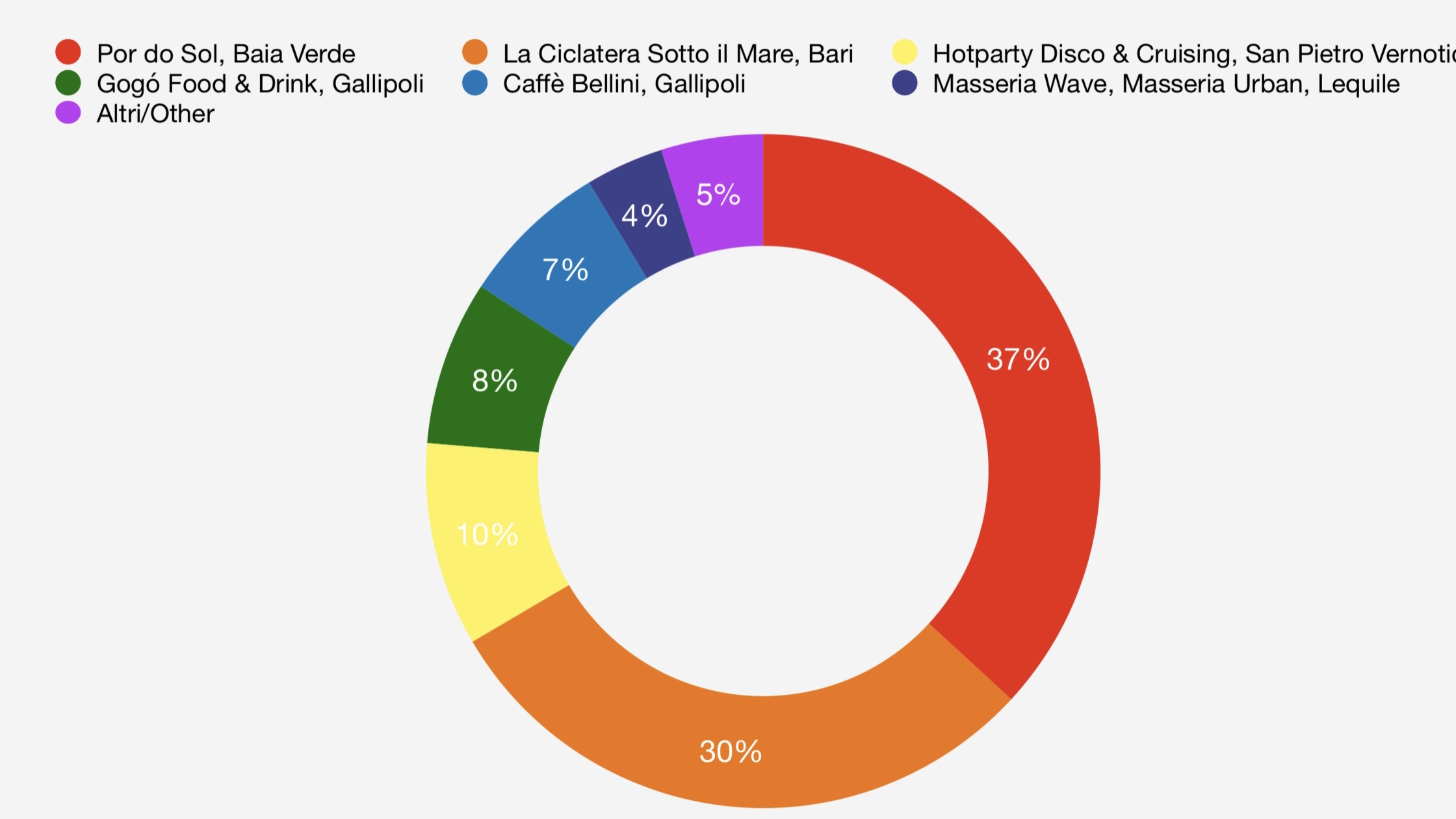 These were interesting choices. Gallipoli beach lido club, Bari bar and restaurant and Brindisi cruising club - HOTPARTY ITALY. Who doesn’t need to blow away those cobwebs gathered during the Covid19 lockdowns.

With 38% of the vote did you expect anything less? Orecchiette con cime di rapa - the iconic dish of Puglia - was your favourite. 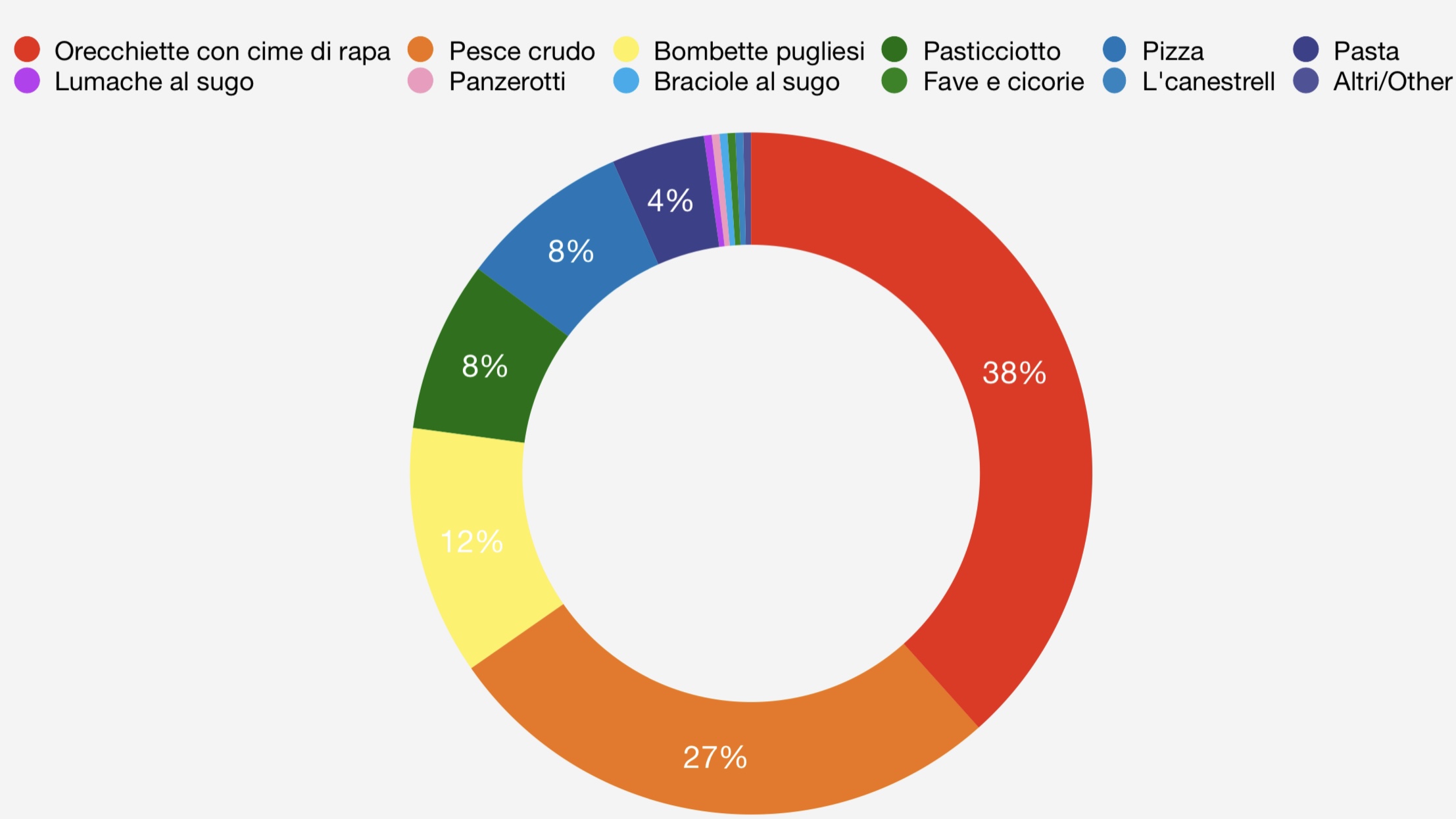 The popularity of pesce crudo is no surprise. Our coast is dotted with working ports where you can watch the fishermen unload their catch from small fishing boats. It doesn’t come fresher than the seafood street food served up at Bari’s Porto Vecchio.

The results reflect the open question. Almost every respondent had a different favourite restaurant. But some names came up a number of times. Tied in 1st place are: La Tonnera (we have no idea where this restaurant is, so please let us know), Osteria Monacelle in Ostuni, Al Trabucco da Mimì and Il Vulcano San Vito dei Normanni. 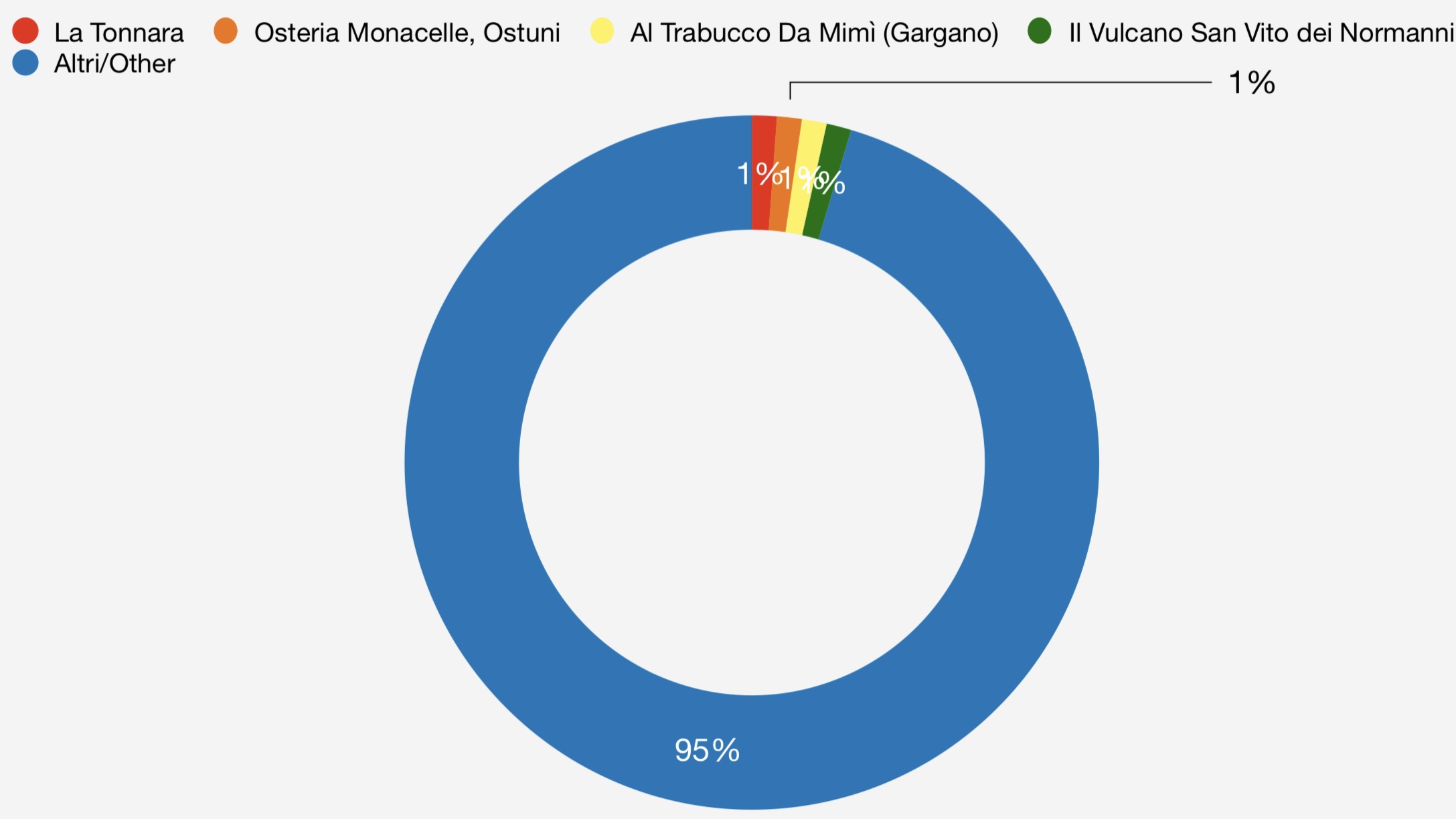 We have eaten in three out of four of these. The appearance of Vulcano in your favourite restaurants surprised us. We know it well - especially when it comes to Covid19 lockdown carry out pizza. It is certainly a popular restaurant with locals and visitors. The food is good, but that is the standard in Puglia. We wouldn’t have expected it to be placed with il Trabucco or Osteria Monacelle. Just goes to show what do we know?

Tenuta Monticelli in Alezio was your favourite. 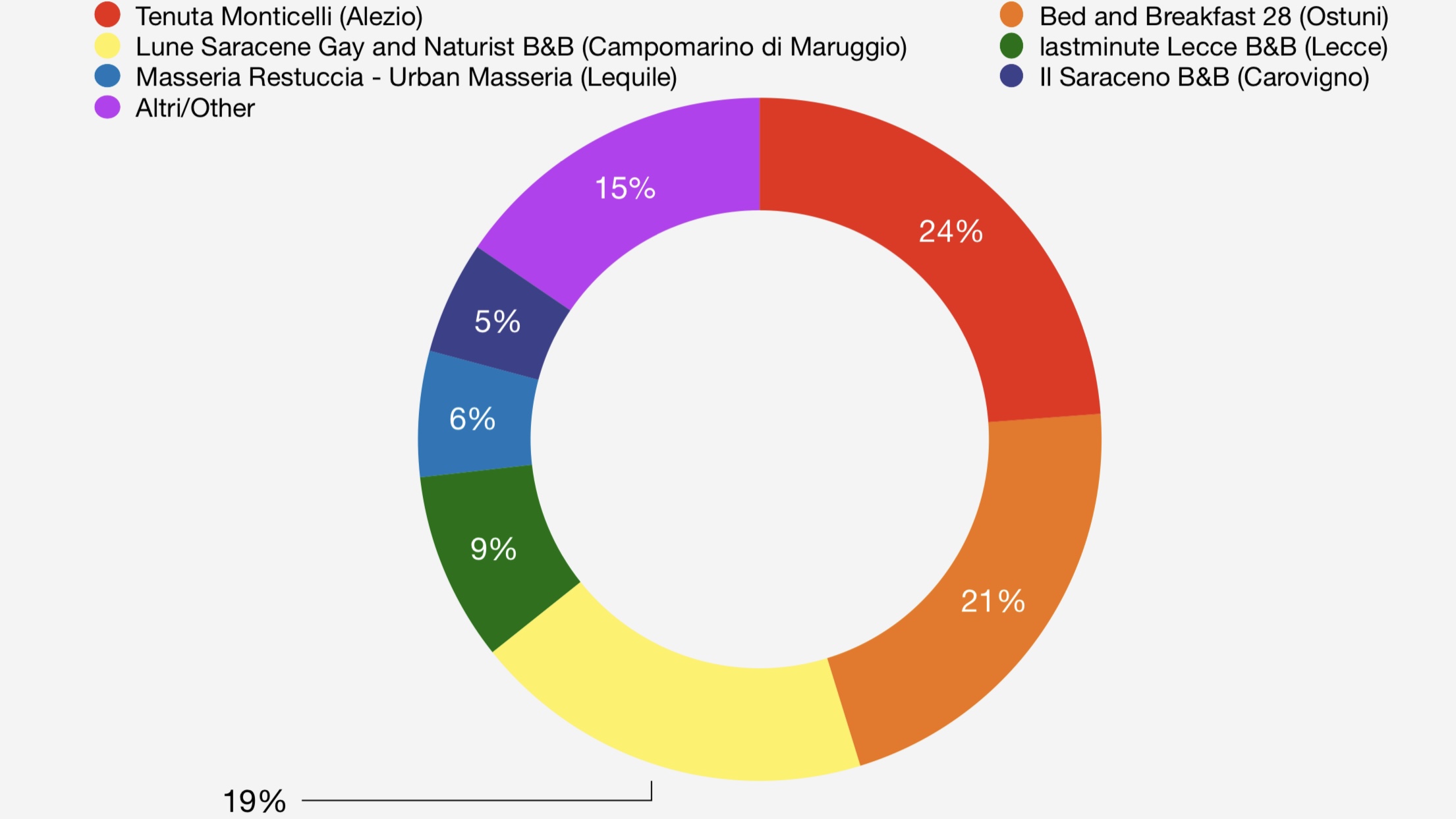 Throughout the voting Bed & Breakfast 28 was consistently your favourite and looked like it would win. Somewhere Tenuta Monticelli crept up and overtook them. It’s not far from Gallipoli and we suspect a favourite with visitors who choose Gallipoli for their summer gaycation.

Nice to see Campomarino’s Lune Saracene Gay and Naturist B&B appearing. We had a fun time staying there.

Carovovigno’s Il Saraceno B&B came in for praise when we asked what your favourite holiday experience of 2020 was: “L'ospitalità del B&B IL SARACENO” - Il Saraceno B&B’s hospitality. We can only imagine!

This was an open question. In presenting the results we have grouped them according to those parts of our region they relate to. Gallipoli and Salento came 1st and 2nd demonstrating the popularity of Salento as Puglia’s top summer destination. 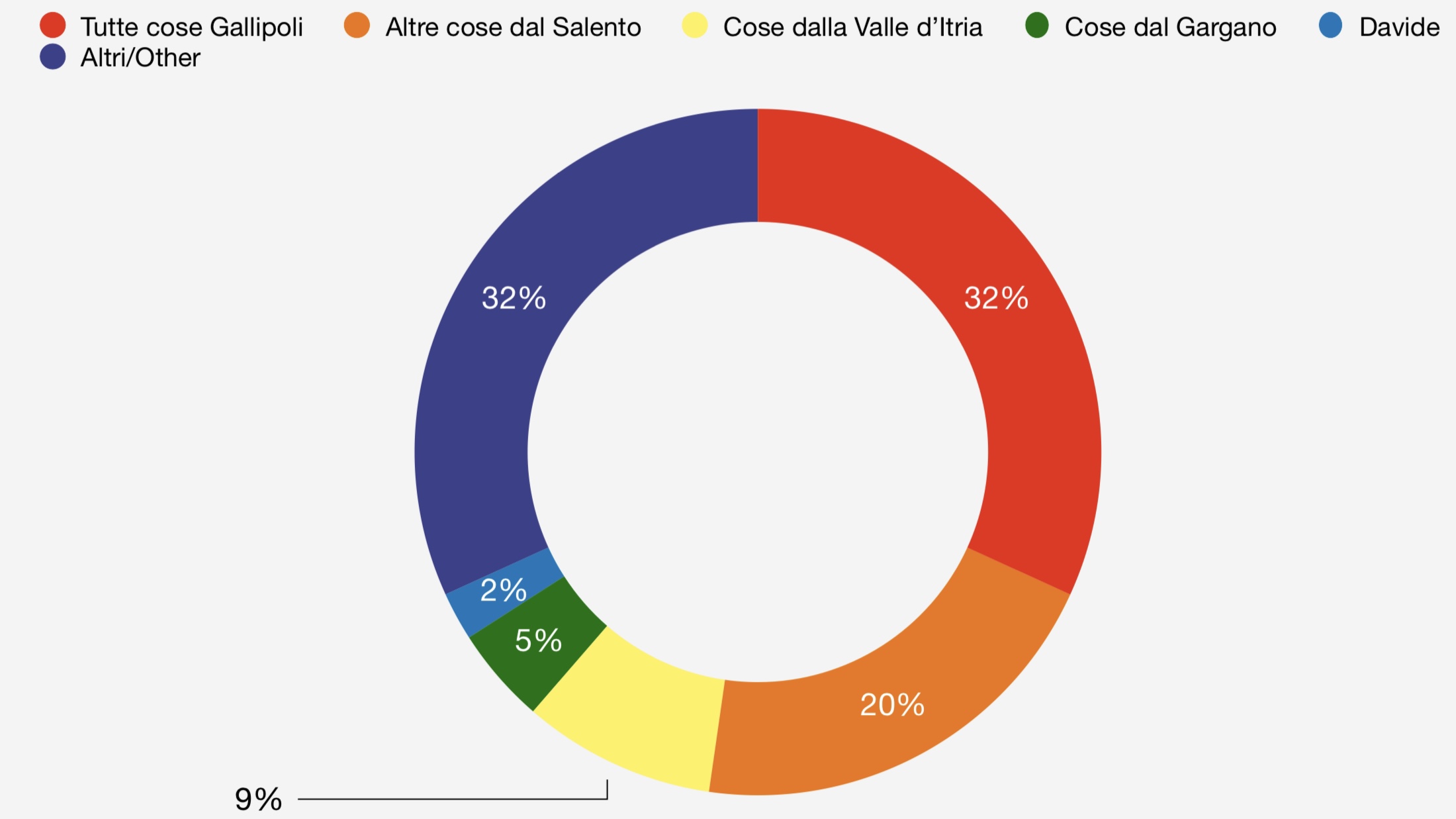 As you can imagine there were more individual, colourful and imaginative responses. Message us for details... 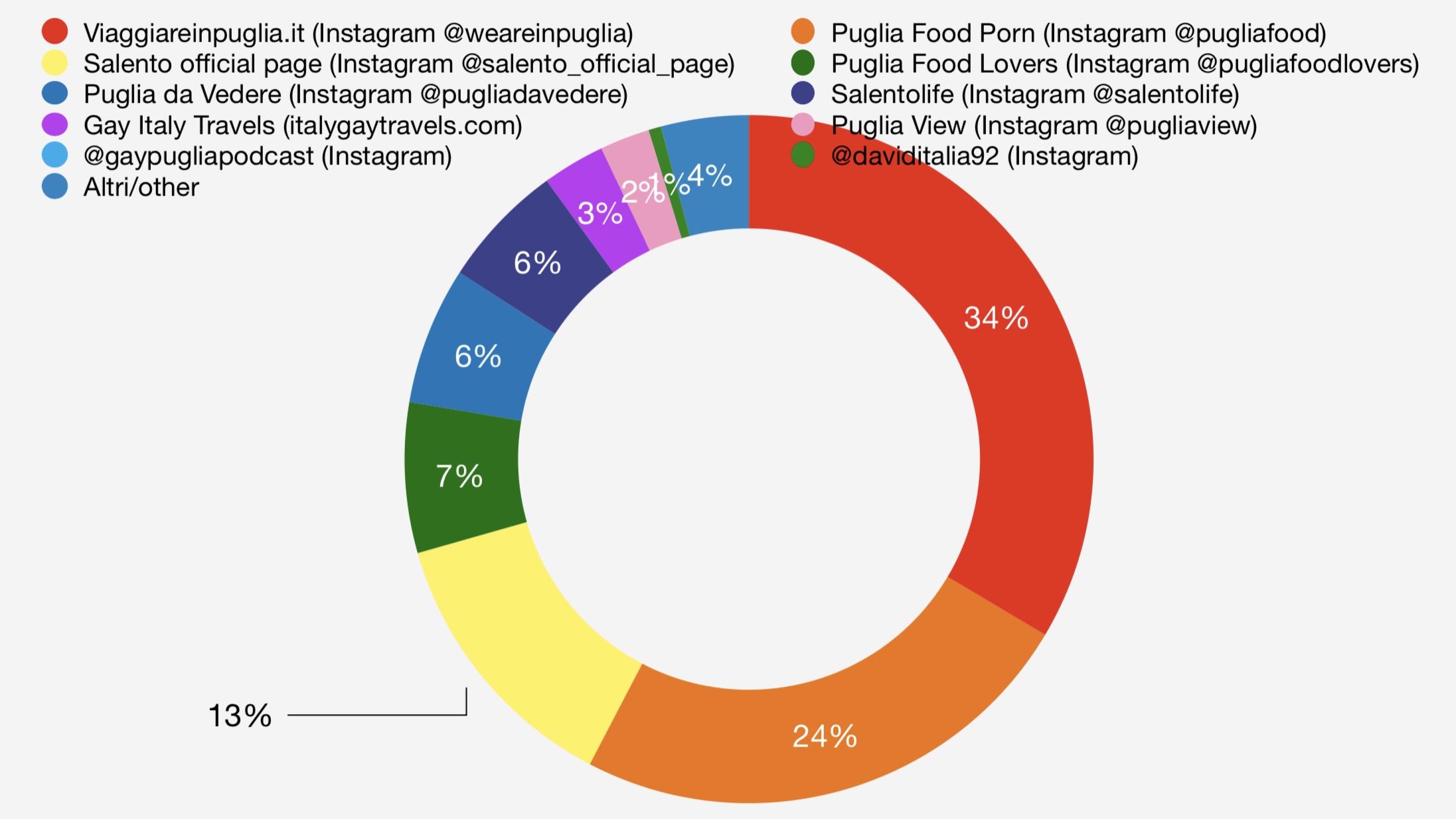 Even though we told you that you should not vote for us, thank you to the 1% of you who did!

Di dove siete | where you come from

29% of the votes came from Bari province , 28% from Lecce province. 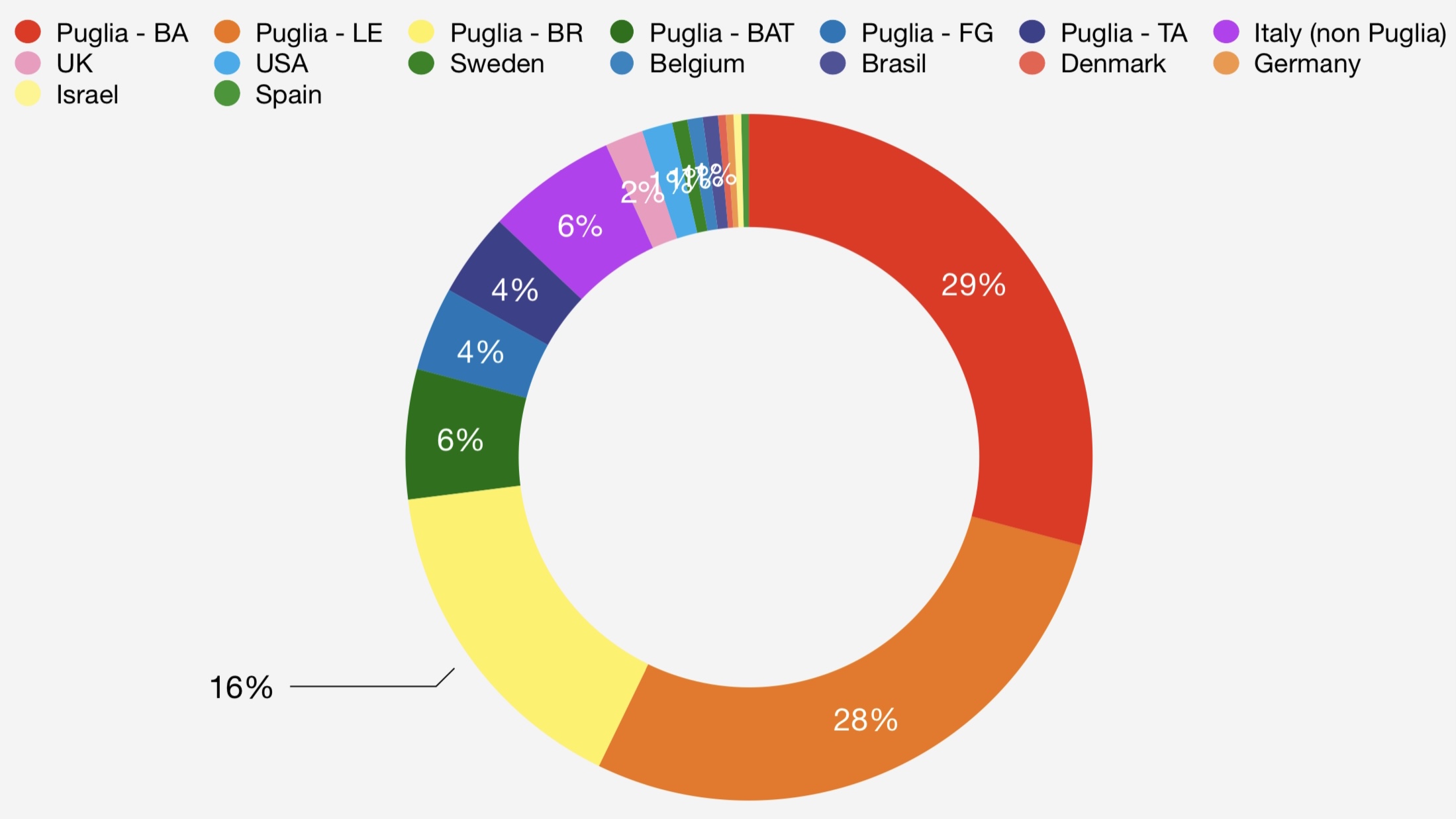 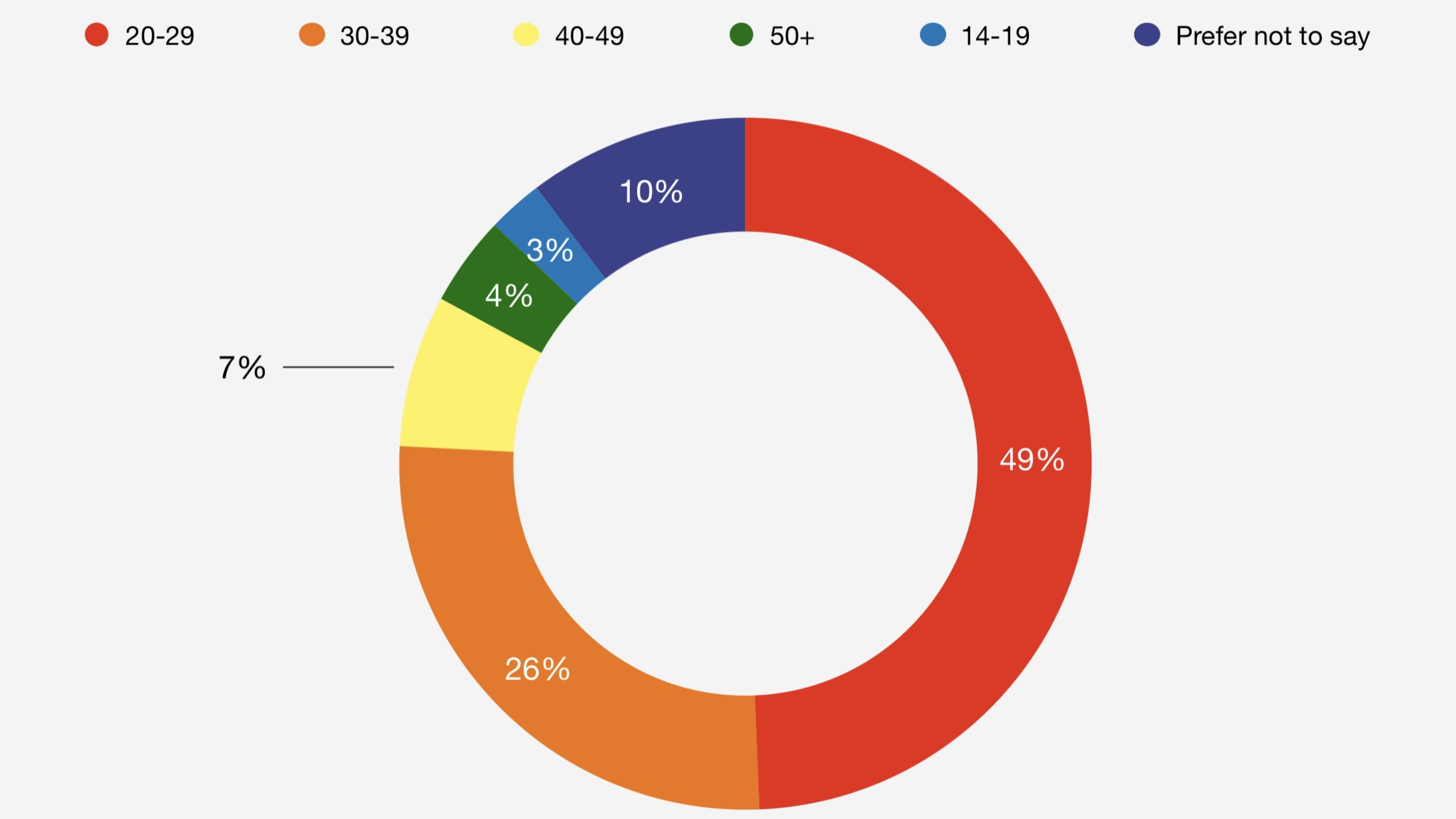