Be in no doubt. Puglia is Italy’s favourite gay summer destination. With the longest coast of Italy’s mainland regions, spanning over 500 miles, Puglia sits between the Adriatic and Ionian with incredible beaches.

It is no surprise that according to a 2021 survey of Italy’s gay community Puglia was voted Italy’s top LGBTQ+ summer destination. For some time now the world’s most popular gay travel influencers the Nomadic Boys have ranked Puglia as Europe’s 5th top gay destination for LGBT+ travellers.

When it comes to ranking Italy’s best gay beach the Nomadic Boys list Puglia’s D’Ayala beach as number 1. They are in good company - it is also our favourite of Puglia’s gay beaches!

D’Ayala dripping with handsome boys who come for sun, sea and - very openly - something else. A must-visit if you want to experience Puglia’s finest.

But according to the 2021 survey of Italy’s LGBTQ+ community Italy’s top gay beach is elsewhere on Puglia’s Ionian coast. Punta della Suina, also the top choice of locals and visitors surveyed in our own Best of Gay Puglia 2020 survey.

The dilemma that isn’t

This difference of opinion provides an opportunity rather than a dilemma. Visit both and you can decide…

Don’t be afraid of missing out. Most gay visitors visit both as well as our other gay beaches!

To help you you plan, here are some of our #WeAreInPuglia travel tips to discover the best of Puglia’s gay and naturist beaches.

The gay and nudist beaches are found in between Punta della Suina and Spiaggia degli Innamorati. Comprising a stretch of rocky shelves and coves, you’ll need proper footwear, so bring some durable water shoes. It’s not the most comfortable of spots, but the water is amazing.

Access the Gallipoli gay beach area from the Punta della Suina car park. Walk through the pine wood toward the sea and follow the coast back up towards Baia Verde and Gallipoli. Go for about 10 minutes to find the nude and gay section. You will definitely know when you get there.

It costs 5 euro for parking in the Punta della Suina car park. 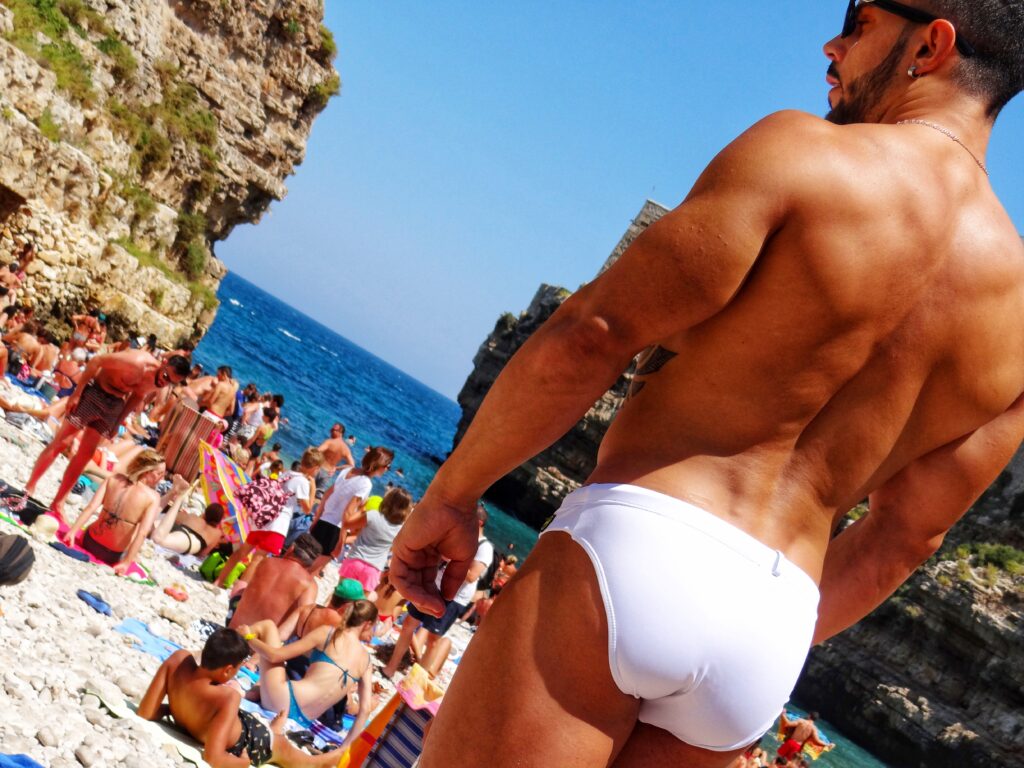 We recommend to ignore the flashy white and gold of G-Beach Club. Historically this was one of the most popular gay friendly beach clubs in Puglia. You might still find gay guides recommending it.

But following a change of management a few years back, they decided that while LGBT individuals were welcome to spend money there, this welcome ended if they wanted to display any public affection.

Same sex couples were asked to leave on at least two separate occasions for kissing at G-Beach Club. We were also contacted by their PR who asked us to remove tags to them on our social media because they did not want to be identified as a “gay” beach club. 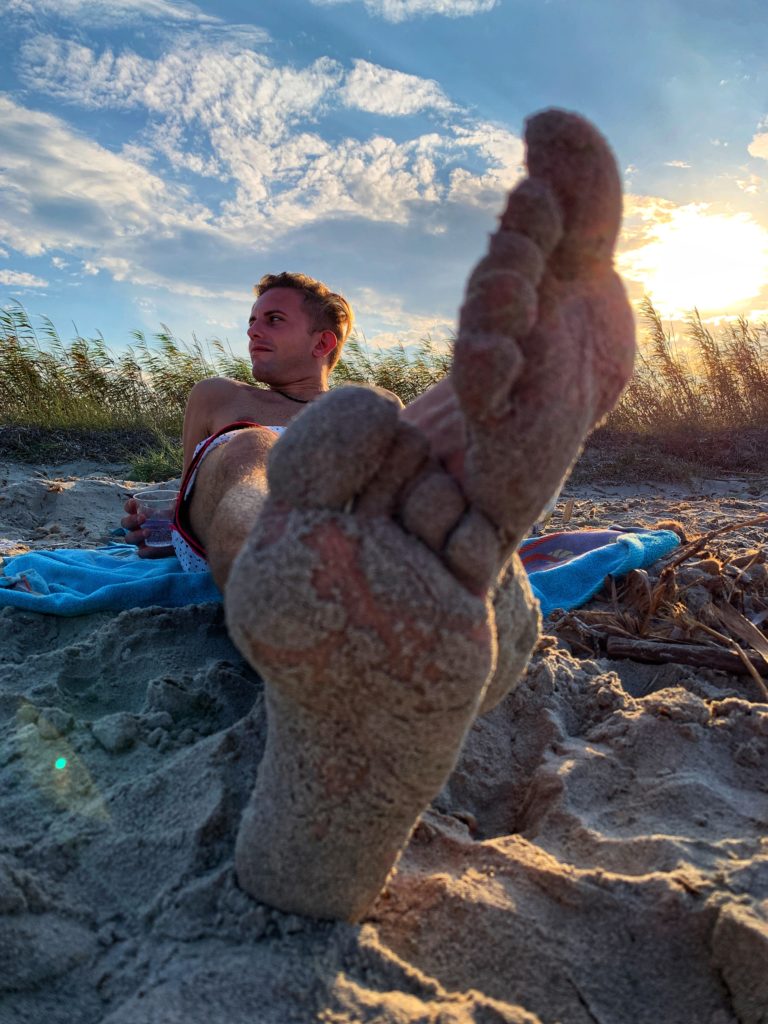 Bring plenty of water. There are no beach facilities apart from those of the lido beach clubs toward the north and south ends of the shoreline.

Spiaggia d’Ayala is our favorite gay and nudist beach in Puglia. It is by far the easiest to get to, sitting on a long stretch of golden sand. Convenient pine wood trees behind the beach offer some necessary shade, too. 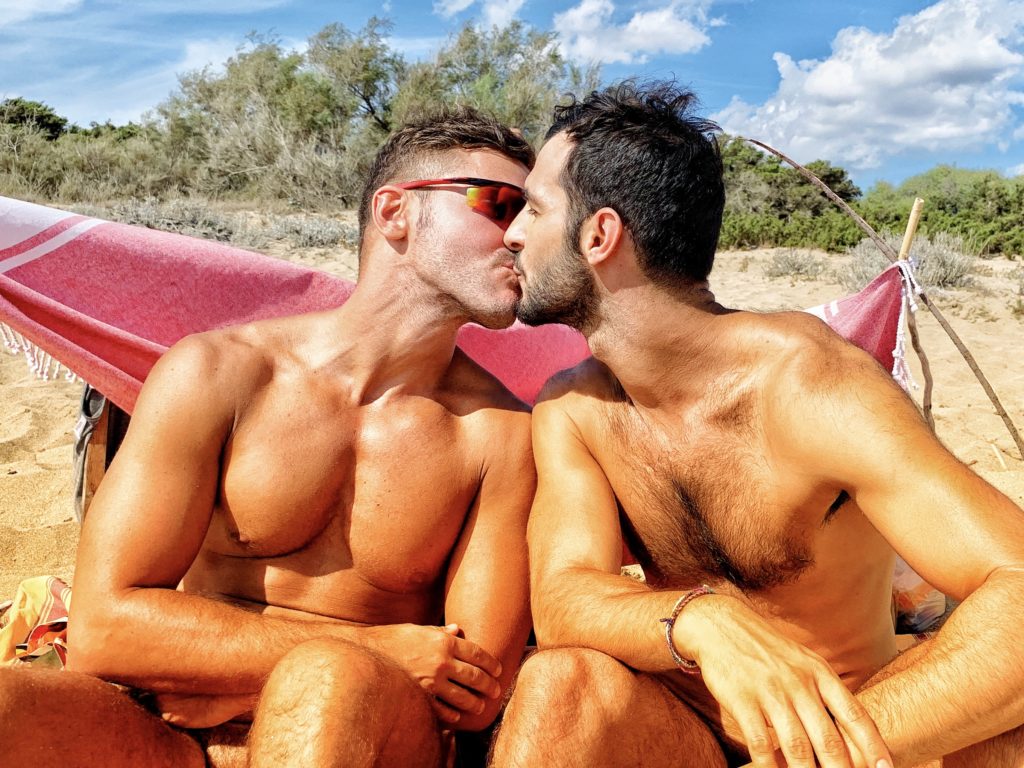 Sometimes there is a concession stand or bar further down the beach closer to Campomarino. Otherwise, there are no facilities. The nearest are found in the town of Campomarino, which is a little over a mile away via the main road. The walk there along the beach though is shorter.

Torre Guaceto on the Adriatic coast is especially popular with locals. But it’s difficult to reach. Torre Guaceto is in a protected nature reserve where vehicles are restricted. Once you park your car nearby, the gay section of the nude beach is still at least a 30-minute walk away. 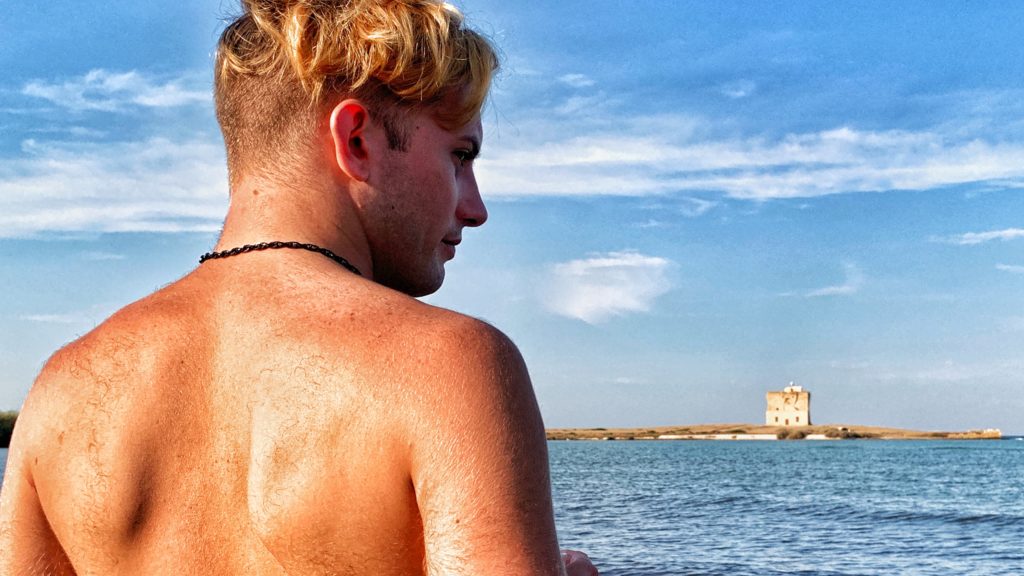 Gay-owned and operated, Pôr do Sol is our favorite summer hangout. If you want a cool beach vibe, an LGBT friendly crowd, a fine sandy beach and beautiful crystalline water, you have to visit. 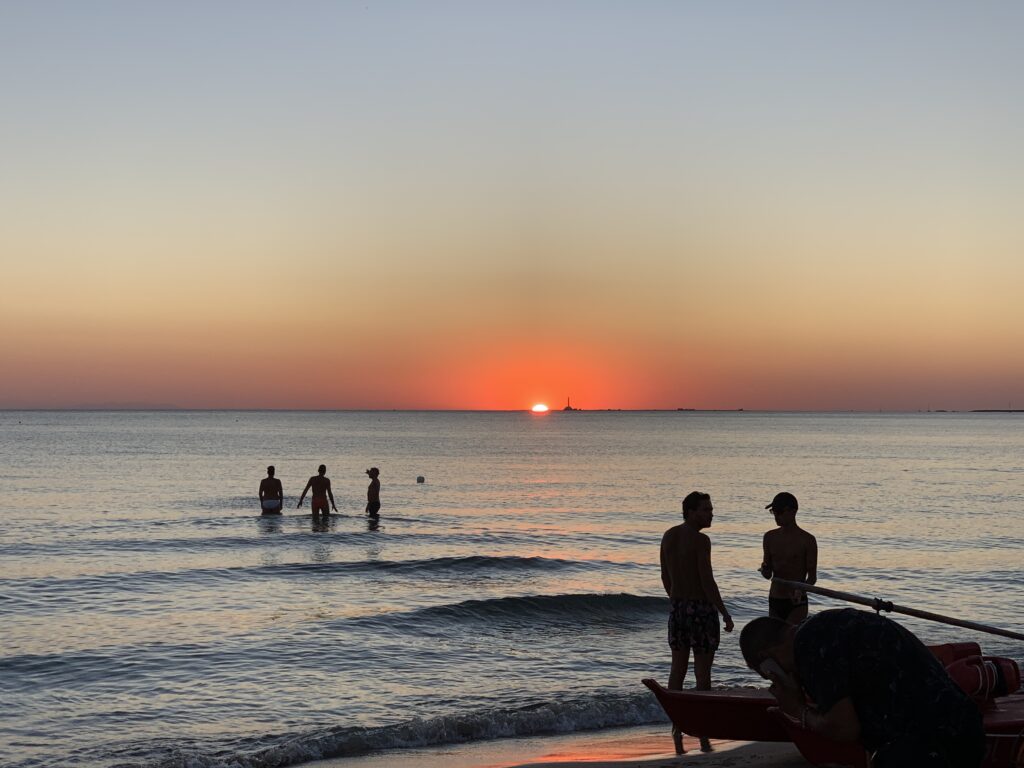 Pôr do Sol draws a mixed crowd in every respect. You’ll find Italians (locals and vacationers), international visitors, friends and couples, gay and straight individuals, and a diversity of ages among them.

The facilities include beach loungers and umbrellas, food, drinks, showers and toilets. A DJ set starts from mid-afternoon through sunset (which is amazing, by the way).

For more information read all about our working trip to Pôr do Sol. Hard work indeed!

There are spots up and down Puglia’s coast where nude bathing coincides with predominantly, but not exclusively, gay and gay-friendly locals.

Pietra Egea is a popular beach area, located between Cozze and Polignano a Mare. So is Torre Incina, located between Polignano and Monopoli. The Big Gay Puglia site offers a fantastic list of gay beaches with useful visitor tips, including directions and what to expect once you get there.

For a little variety, other favorite beach clubs of ours are located at Torre dell’Orso (the Bear Tower). While they’re not specifically gay beaches, we love this location. And in any event, there are plenty of straight guys for gay eyes. 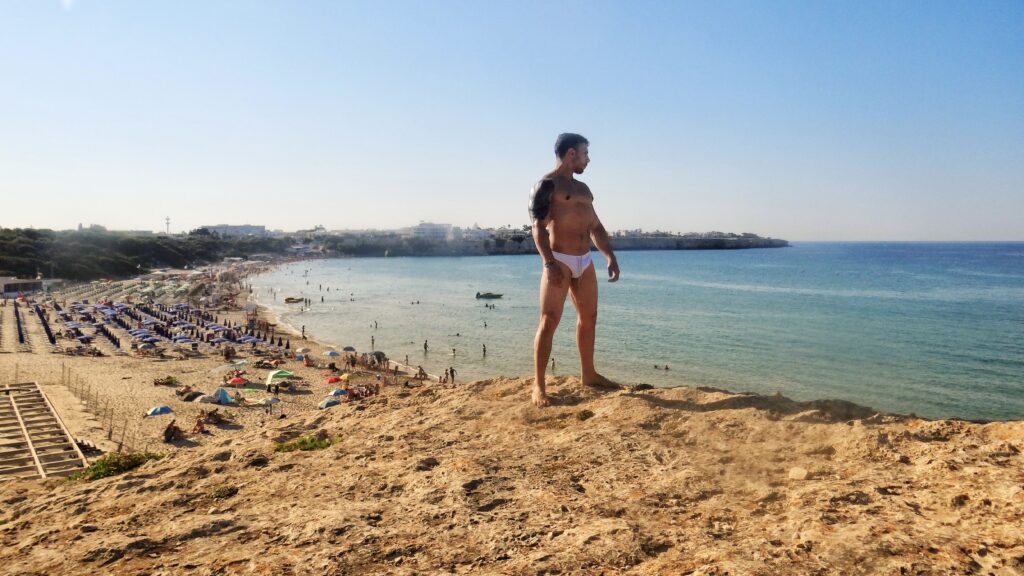 Not far from here, some other stunning bathing spots include Grotta della Poesia (Cave of Poetry) to the north and Torre Sant’Andrea to the south.

Want even more gay beach recommendations? Discover more local spots, from Gargano to the Salento Maldives, as well as how to get to them, in the Big Gay Podcast from Puglia’s curated Puglia beach guide.

You can’t beat Gallipoli’s gay and nude beach for cruising at Punta della Suina and Spiaggia degli Innamorati (described in the beaches section above). Most of the action takes place in the pine wood that runs behind the beach. 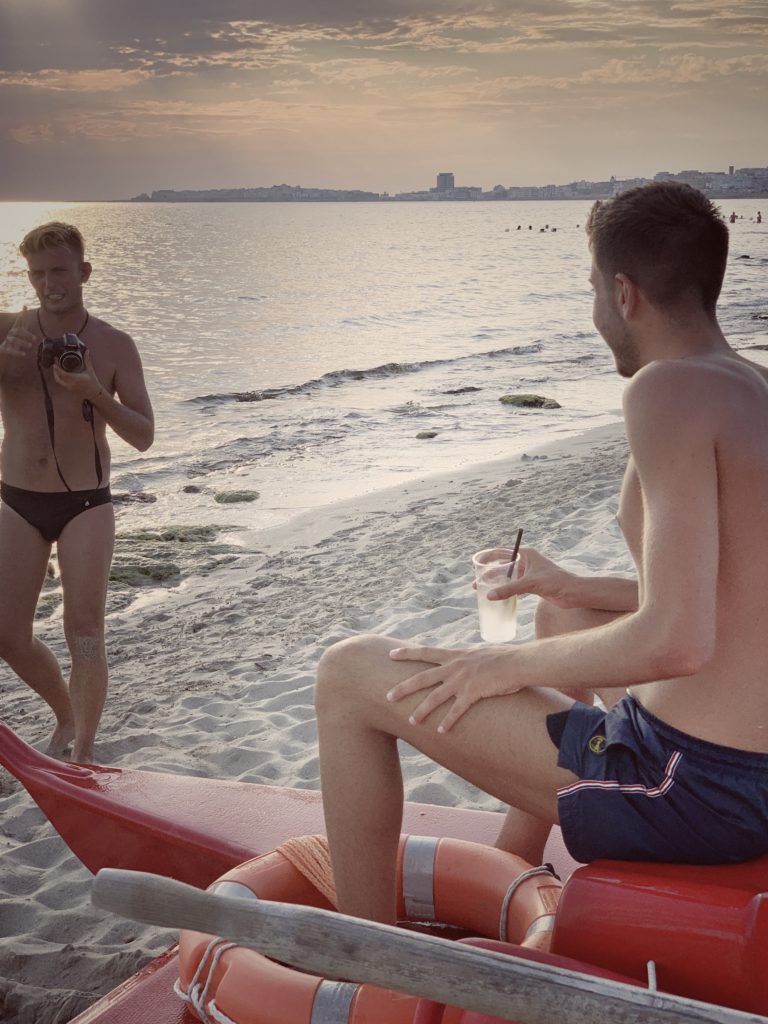 As is the case with most of Puglia’s gay beach locations, cruising is common among those sunbathing, and most hookups on the beach are arranged using apps, rather than by chance encounter. A case of try before you buy!

You’ll find Ostuni’s local gay cruising scene near the beaches of Lamaforca and Torre Pozzelle, which are in close proximity to one other. They’re about 8 km from Ostuni itself, just off the main coastal highway. By the way, these are both popular family beaches, with dedicated tourist villages nearby. 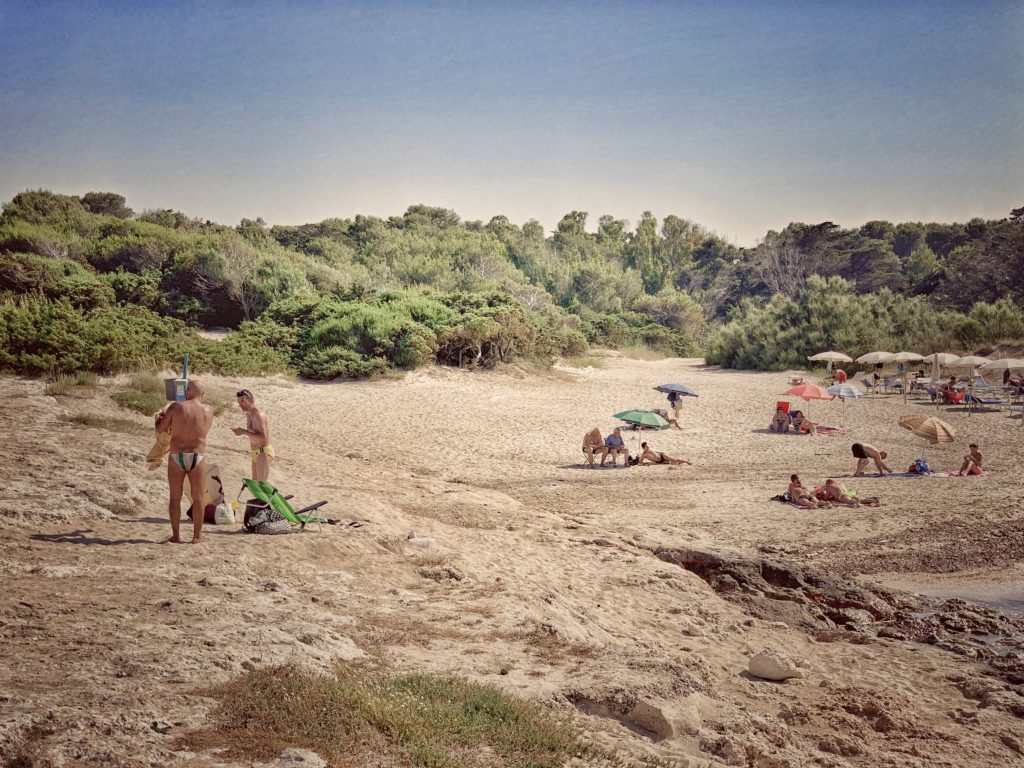 You will see guys waiting in their cars, or standing by the paths that lead into the woods. Once in the woods, which only stretch back a short distance, just follow the paths and the men.

Both cruising areas are popular with men who identify as straight (Torre Pozzelle more so). Most people are likely to say hello and ask you what you are looking for before inviting you to follow them.

Beware though! We have seen police cars drive up and down the stretch of road that leads to Lamaforca from time to time, pulling drivers over to check their documentation. 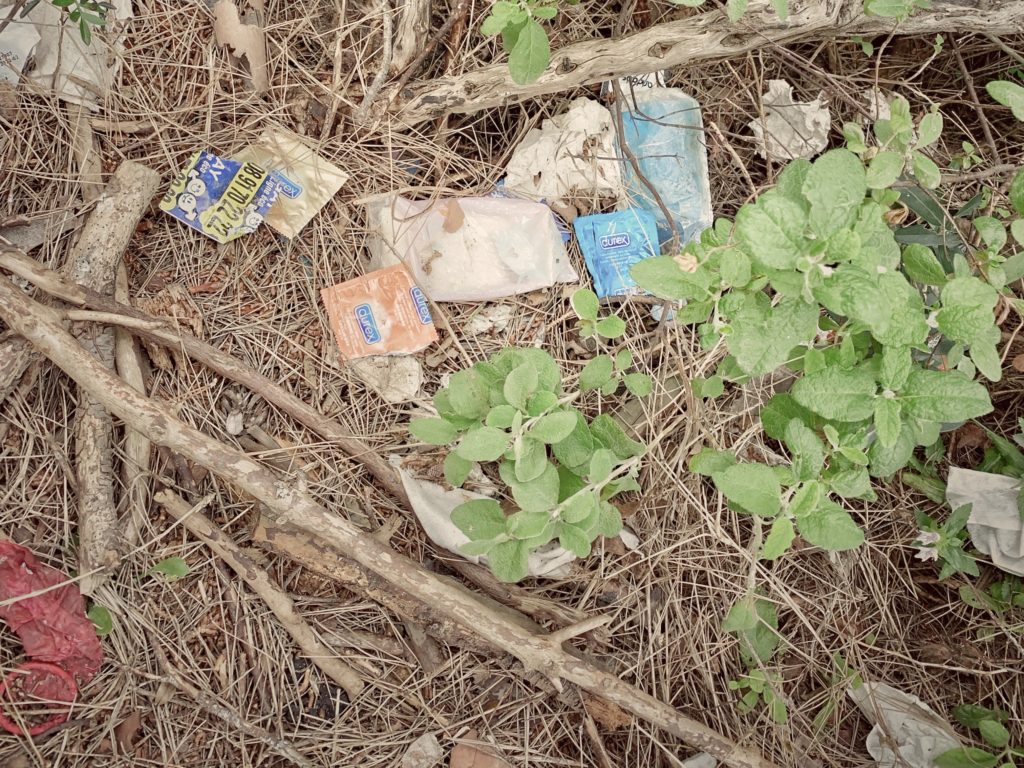 If you do continue onto Lamaforca’s beach you will notice a gay presence close to the carpark side of the beach.

Check out the Big Gay Podcast from Puglia Ostuni gay guide for detailed instructions on how to find the gay spots at both, plus more information on what to expect.